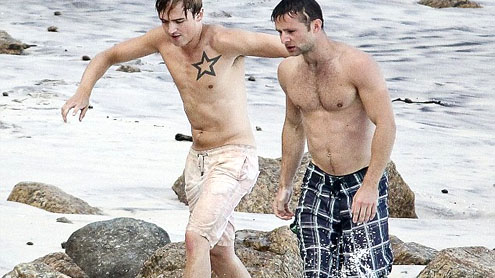 McFly’s Tom Fletcher and Harry Judd stole a moment together during the band’s visit to Brazil for a concert.

The pair seemingly left Dougie Poynter and Danny Jones at their hotel as they hit the Sao Conrado beach in Rio de Janeiro, flaunting their buffed-up bodies as they frolicked in the waves.

The pop pals looked like they had the time of the lives as they waded into the fierce waters with only their beach shorts, given their fans an eyeful of their toned and muscular bodies.Harry wore checked shorts, and showed off his tanned body as the hit the beach – while Tom,with his star tattoo proudly displayed on his chest, went for light coloured shorts.

Their beach fun wasn’t without its risks however.They were nearly knocked down at one point as they tried to out run the waves.And Tom, 27, had a lucky escape after his shorts nearly came down following a battering from the sea.Harry, 26, was quick to tease the band’s lead singer about the near miss, and at one point couldn’t contain his laughter.

It wasn’t all water frolics between the bandmembers.They also cooled down with some cocktails as they relaxed on their loungers.Harry didn’t just spend time with Tom ahead of the band’s performance at the Z Festival in Rio last month.The drummer was also spotted spending some time with Dougie.Unfortunately for the band’s many female fans, Harry kept his top on – as did Dougie.Wearing a tight T-shrit and aviators, Harry shared a joke with his bandmate – who wore ripped jeans, white T-Shirt and a checked shirt. – Dailymail