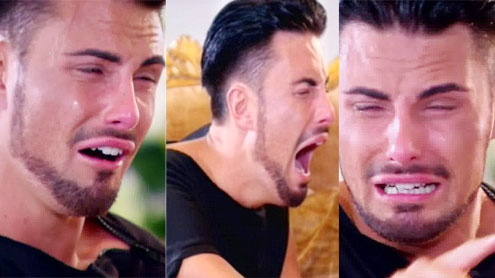 He is one of the most flamboyant contestants to have entered this year’s X Factor.So it was no surprise Rylan Clark put on a display of epic proportions upon learning he was through to the Live Finals of the competition on Sunday night’s episode of the ITV1 talent show.

In what was perhaps the most dramatic reaction of all time, the 23-year-old Essex boy put on an Oscar-worthy performance as he collapsed to the floor in a fit of emotion.With his reaction to receiving the good news from judge Nicole Scherzinger verging on the ridiculous, the 23-year-old wannabe was left rolling around on the floor unable to speak as he dealt with his emotions.Choking back his tears, Rylan let out a series of gut-wrenching sobs as Nicole looked on in amusement.

Finally able to compose himself for long enough to give his new mentor a big hug, the flamboyant singer couldn’t seem able to believe that he was through.’Is this a wind-up? Are you having me on?,’ he questioned.Rylan later added: ‘We’re going to have a right laugh.’But despite his somewhat over the top reaction to the news, Rylan insisted he isn’t the ‘joke’ entry of the competition.

He said: ‘I think at the beginning of this process everyone looked at me as a bit of a joker and then people couldn’t be more wrong. I had to go in there and show that I can be serious and be a singer.’I haven’t really got  that much back home, I want to turn that around I want to  be achieving something rather than keep being a let-down. I have got nothing to go back to now. I’ve got too much riding on this.’

Meanwhile, Nicole said of her act: ‘Rylan my love… he’s all spikes and sparkle, we need diva music and empowering diva anthems for him. He would definitely have his own audience.’And although Twitter went into a flurry of activity with users poking fun at the model’s reaction, it would seem Kitty Brucknell – who reached the Live Shows of last year’s X Factor – has found something of a soulmate in the eccentric hopeful.She tweeted: ‘Omg omg Rylan!!! I’m so sorry that was way funny! kittystylebreakdown 😉 u are a legend! And I want you to win like now!!