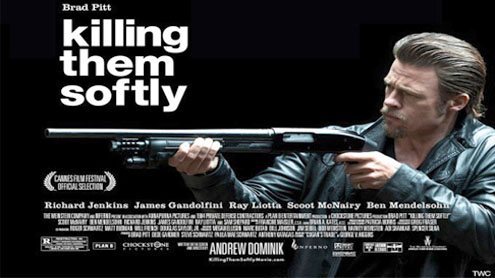 Brad Pitt has joked that his knees and back are suffering after filming too many stunts.The Hollywood star attended a special screening of his new movie Killing Them Softly in London on Thursday evening.

In the crime thriller, Brad plays Jackie Cogan – a professional enforcer who investigates a heist which takes place during a high stakes mob-protected poker game.The role saw the star taking part in a series of high-octane sequences, which after years of shooting movies has taken its toll.’Does it ache? Oh yeah, yeah. The knees are gone, the back is a little crunchy. Yeah sure,’ Brad laughed to UK TV show Daybreak when asked how he is feeling after the action scenes.

However, the 48-year-old – who has also been shooting zombie action movie World War Z – then quipped that putting his body on line for a dangerous stunt was nothing compared to raising six children.’Try getting up and getting the kids ready for school. That is every bit as painful as anything I did in this,’ he joked.Killing Them Softly is based on the 1974 novel Cogan’s Trade by George V. Higgins and is produced by Brad’s production company Plan B.

The movie is directed by Andrew Dominik and also stars Richard Jenkins, Ray Liotta and James Gandolfini.Brad was full of praise for his talented co-stars.’Watching Jenkins, I felt like I was watching Peter Sellers, really, and I mean that. And then watching Gandolfini I felt like I was watching [Marlon] Brando,’ he told reporters at the screening. ‘For an actor you have respect for other actors when they do something that is under the skin and unexpected and something I would have never expected. You really enjoy it, and this was one of those experiences.’ – MSN