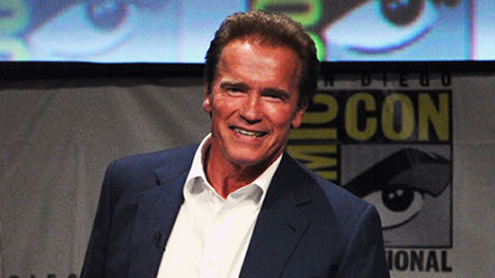 The legendary Austrian action hero has revealed the truth behind one of his most famous lines from The Terminator. Arnold told Cover Media at The Expendables 2 press conference in London this week that he didnâ€™t anticipate how big the catchphrase would become. ‘I’ve never had a bad line. All one liners are very important,’ Arnold joked. ‘I remember when we did Terminator, we did the line â€˜I’ll be backâ€™, I had no idea this was going to be an important line and something that people would repeat.’

Arnold also revealed he didnâ€™t want to say the famous quote the way it is remembered. After a lengthy process involving numerous takes and arguments with director James Cameron they reached a decision. ‘I had an argument with Jim Cameron about saying â€˜I will be backâ€™ and he said, ‘No, I wrote it as I’ll be back.â€™

‘I said maybe it’s a little bit more machine like to say, ‘I will be back’, Cameron says no,” Arnold explained. ‘Sure enough when the movie came out and people come up to me and say, ‘Say the line, say the lineâ€™ and I’d say, ‘What line?’ and they’d say, ‘I’ll be back’. It just clicked with people. But I had no idea how big it would be at the time.’-MSN