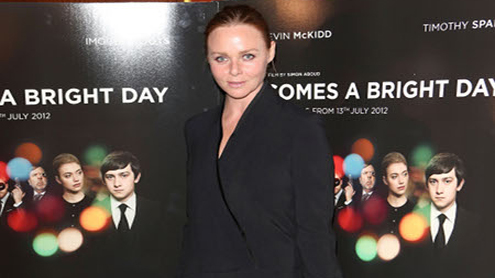 The British designer will sell eco-friendly, affordable and comfortable styles on her website and in store. She is adamant her line will offer exactly what women want. ‘Well-made lingerie is key,’ Stella told T magazine. ‘It has to fit, function, and do its job first and foremost. ‘ The line of everyday lingerie will be available from August and includes five different bra shapes. These are a moulded underwire, a plunge version and a strapless and seamless style.

The bright colours chosen by the internationally recognised designer include electric blue and python and easier to wear pink and black. Although they are not cheap, the line is affordable with bras priced at $55 and matching lace and satin knickers coming in at $26. ‘Feeling constricted by one’s underwear just isn’t my thing; you need to rely on the quality’, says Stella about the thought process behind the materials chosen for her line.

The designer has a passion for environmentally friendly fashion. She has already designed eco-friendly clothing such as her Spring/Summer 12 sunglasses which are crafted from acetate plastic made of 54 per cent natural resources. Similarly the lingerie will all made from organic cotton and recycled metal.

Stella has a large celebrity fan club of A-list women including Gwyneth Paltrow, Rihanna and Kim Kardashian. She also has a good reputation for her designs in the underwear world thanks to her inclusion of Spanx type panels in some of her dresses. These work in a similar way to supportive knickers to slim and shape the form.-MSN