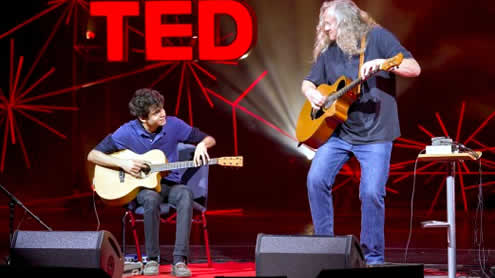 Pakistani guitar genius Usman Riaz has won a new legion of international fans after giving jaw-dropping performances during his tour of the United Kingdom as part of the TEDGlobal 2012 Fellow Programme held last week year in Edinburgh, Scotland.

For the 21-year-old TED Fellow, the height of his visit – as well as his promising music career – came when he performed a duet with his guitar ideal and master of percussive guitar from America, Preston Reed. At the start of the sensational performance before hundreds of music experts present in the Edinbugh International Conference Centre, the young musician from Karachi seemed in awe of the man he grew up listening to. Within seconds he was at complete ease as he overwhelmed with his guitar and gave an astonishing performance alongside Preston Reed. The veteran looked on impressed at how his young fan had not only learnt through the Internet his improvisations but had perfected and added his own mastery to the riffs.

The two brought out rich  sounds from their acoustic guitars – sounds that were larger than the instruments. And when they finished after two intense duets, the audience rose to their feet and applauded them for pulling off what was arguably the biggest highlight of this year’s conference which saw musicians from all over the world for sessions on creative music. Riaz made his impression when his ‘Fire Fly’ video went viral and brought him to the notice of the global music community, but his duet with Preston Reed looks set to give him a firm footing on the world stage and will help establish his credentials further. Preston Reed told the audience that Usman Riaz’s performance was “mind-blowing”, “wonderful” and he was honoured to have played with the young musician.

Less than a week after going online, their duet video had been watched more than 100,000 times, a testimony of the poignant delight the two musicians from different eras produced. For Usman Riaz, it was a “very surreal” moment to have performed alongside his rock god who has deep influence over his guitar techniques but more than that he and Kaki King were the very early musicians who informed his sense of music and provided spiritual guidance. – Thenews