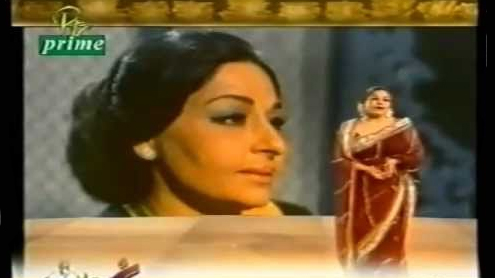 Music critics believe that Khalil Ahmad graced the Pakistani films with paranormal compositions and until this day remains an icon who brought beauty and brilliance in music. I remember Shahenshah Nawab assigning the job of composing Allama Iqbal’s ‘Bahazoor Risaalat Ma’aab’ to Khalil Ahmad in 1983 and Nayyara Noor and I had the honour of singing it for PTV. The simplicity of tune reaching to climax was amazing and remains one of my career’s hallmarks.  One of the important Khalil Ahmad’s films was ‘Daaman’. The movie was directed by Qadeer Ghauri. It produced the right music at the right time. Its hit song was “Na Chura Sako Gey Daman, Na Nazar Bacha Sako Gei”, sung to perfection by Nurjehan. It enthralled the listeners for time to come.

It was in the year 2011 when I was invited by the Pakistan Television Corporation, Karachi Centre to perform live in its programme ‘Mehfil-e-Shab’ produced by Tahir Shah, I paid tribute to Mehdi Hasan by singing Himayat Ali Sha’air’s penned song “Khudawanda Yei Kaisi Aag Si Jalti Hei Seeey Mein”. The song was from Khalil Ahmad’s gems from the movie ‘Lori’ released on November 14, 1966. Like millions that came under the spell of this song, I too became a victim of presence of the pathos in this composition. A tragic score from this movie but in a reasonably medium fast tempo with piano playing as its base, sung by Mujeeb Alam was “Mein Khushi Sei Kyun Na Gaoon, Mera Dil Bhi Ga Raha Hai, Yei Faza Haseen Hai Itni Keh Nasha Sa Cha Raha Hai”. Our social fibre especially related to family life was portrayed in Khalil Ahmad’s composition, “Taali Bajay Bhy Taali Bajay, Munna Hamara Dudo Nahaye, Puto Phalay”. The transporting power of love and gentility were successfully captured and conveyed by Mala’s melodious voice was “Hawa Nei Chupkay Sei Keh Dia Kya Kay Hum Bhi Sharma Kay Hans Paray Hain”. Released on October 14, 1966 this movie was a golden jubilee hit that completed 52 weeks of its viewing in Karachi.

Its cast comprised Zeba, Santosh Kumar, Saloni, Talat Siddiqui and Master Roofi. It was produced and directed by Himayat Ali Sha’air. Dialogues were written by Ahmad Nadeem Qasmi. The best part of the movie was a lullaby “Chanda Kei Hindoley Mein” rendered first by Suraiya Hederabadi and then by Nurjehan. While picturing this song Muhammad Ali’s emotional shock on his face is worth watching, whereas he is relieved at his nephew’s recovery but hit by the realisation that he has lost his beloved to take over the role of child’s mother. Also, the out of the world super rendering of Madam Nurjehan is matched only by the flawless acting of beautiful, talented Zeba. Yes, when the voice changed at peak, so did her facial expression. Suraiya Hyderabadi’s version is pictured on Talat Siddiqui and child star Master Roofi.

Released in 1964, movie ‘Khamosh Raho’ had Khalil Ahmad’s musical score. Its cast was Deeba, Yousaf Khan, Meena, Muhammad Ali, Zeenat, Gulrukh, Tarana and Abbas Nosha. The story was written by Riaz Shahid and the movie was directed by Jameel Akhtar and it was produced by Tajammul Hussain Rizvi. Lyrics were penned by Tanvir Naqvi, Himayat Ali Sha’air and Habib Jalib. Khalil Ahmad haunting melody “Jageney Waalo Jaago Magar Khamosh Raho” in the voice of Nahid Niazi is an evergreen number. The famous poem by Habib Jalib, often quoted by Punjab Chief Minister Shahbaz Sharif in his speeches ‘Mein Nahi Maanta Zulm Kay Zaabtay’ rendered by Ahmed Rushdi is also from the movie. At the time of its release, this song gained Khalil Ahmad countrywide recognition. This movie was remembered for Muhammad Ali’s negative role. It was a bold theme tackled by the best brains of the film industry even if the commercial challenges were not met. The other two worth mentioning songs are “Tu Nei To Preet Nibhai Sanwaria Re Nikla Tu Harjai” by Mala and “Kya Ishara Tu Nay” a duet by Ahmed Rushdi and Nahid Niazi.-Dailytimes