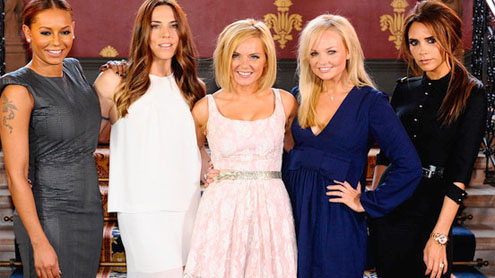 The Spice Girls are set to make £5 million each from the Viva Forever! musical.Each band member has invested in the West End theatre show, which will be launching in London at the end of this year.

Their manager Simon Fuller is also backing the project.Yesterday Victoria Beckham, Geri Halliwell, Emma Bunton, Melanie Brown and Melanie Chisholm reunited in London to announce details about the highly anticipated production.’If we can fly the flag for Britain, we’d love that – to do a Mamma Mia! It would be nice if it made us a few quid too!’ Mel C, formerly known as Sporty Spice, told British newspaper The Mirror.

Based around the Spice Girls’ biggest hits, the show will tell the story of a young girl trying to deal with finding fame on a reality TV show while staying true to family and friends.The five stars also revealed that plans for a spin-off movie, a Broadway theatre production and CD compilations are in the pipeline.

While there won’t be any new material, the CD will include many of the Spice Girls’ B-sides.’London is a great starting point. We’re all so proud to be British. We’re hopeful this will be the start of something big,’ Victoria said.Viva Forever! is set to open at London’s Piccadilly Theatre on December 11. – MSN