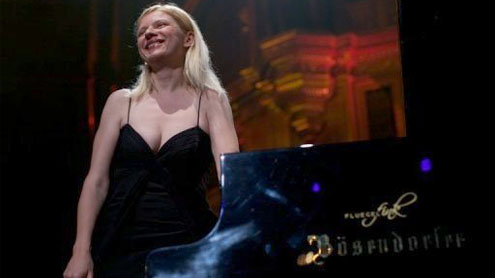 A pianist who launched her career by posting videos of herself on YouTube translated her online success into reality with a solo performance at one of the world’s most famous music venues on Tuesday.

Ukrainian-born Valentina Lisitsa dazzled a crowd of thousands at London’s Royal Albert Hall, her fingers flying through a two-and-a-half-hour virtuoso performance.The blonde 42-year-old, known as the Justin Bieber of the classical music world because of her route to fame, had advertised the concert on her YouTube page and website, allowing fans from around the world to pick her programme.The final selection included two pieces that are among her most-viewed hits on YouTube, Beethoven’s “Moonlight Sonata” and Rachmaninov’s etude, popularly known as “Little Red Riding Hood”.

The experience had been surreal, she told AFP after the concert, adding “I’m relaxed… I’m coping.”While holding the audience spellbound with her playing, she also won over the largely British crowd of some 2,500 by referring to the evening as a special night not because of her performance, but it coincided with England meeting co-hosts Ukraine at the Euro 2012 football tournament.Lisitsa, who began playing the piano at the age of three in Kiev, began promoting herself on the video-sharing website five years ago when she posted a video of herself playing the Rachmaninov etude.

What happened next took the musician completely by surprise.Five years later, her 180-odd videos have garnered nearly 50 million hits. She has been signed by the Decca Classics label owned by Universal, and her concert Tuesday was broadcast live over YouTube in a historic first for classical music.”It’s word of mouth,” she said of her grassroots success. “I learned how to make videos. You have to be honest, there’s no fake stuff.”

Admitting she had been completely “illiterate” about social media prior to 2007, she put much of her popularity down to engagement with her fans.”I write a short description about most pieces and answer comments,” she told AFP. “It starts a conversation.”It also made her accessible to her fans in a way many classical musicians are not — a concept illustrated by her interaction with two young, star-struck fans backstage after the concert.

“Are we Facebook friends?” she asked the excited girls.The transition from a computer screen to a live solo concert before thousands was “difficult”, she admitted. “Not everything that looks beautiful on YouTube translates. You have to jump twice as high.”The pianist laughed at the Bieber comparison, but said she took the young pop star’s rise from YouTube wannabe to one of the biggest acts in music in the world seriously.”I remember reading about him in the Wall Street Journal,” she said. “I thought, how did it happen? He seemed normal… He was looking for his niche, and he found it. I thought, ok. Good thing to learn.” – Yahoonews