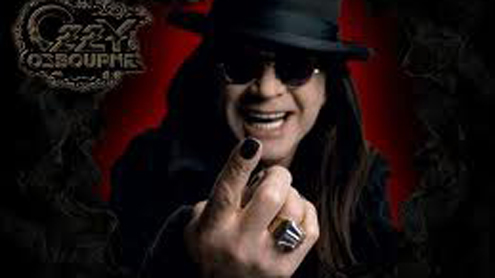 The singer has reunited for a world tour and new album with Black Sabbath. Ozzy and his bandmates Geezer Butler and Tony Iommi are enjoying a range of shows, but admit it’s the more intimate moments that appeal more. ‘At festivals the audience are eight f**king miles away!’ he laughed in an interview with Kerrang! magazine. ‘You’re there going ‘iiis aanybooooody ooooout theeeere?” The band is enjoying being back together. Tony and Geezer both admit that Ozzy lightens the mood during recording.

‘Every time we get back together it’s like we’ve never been apart. Time doesn’t seem to exist. We talk about old times. Ozzy’s always telling jokes, pi*sing about,’ Geezer explained, before Tony added: ‘Ozzy’s really enthusiastic, and it’s great to see him like that. I haven’t seen him like that for a long time. He really wants to do it, and we’re all the same. And that’s such a great attitude.’ Ozzy says retirement isn’t an option. The 63-year-old star wants to keep going in the music industry. ‘How the f**k can I retire? It’s not a job. I didn’t go, ‘Ooh, I’m 65 now, I’m gonna get my pension and look at my photo album from when I met Paul McCartney.’ It’s a passion! Do you ever stop having sex?’ he exclaimed.-msn