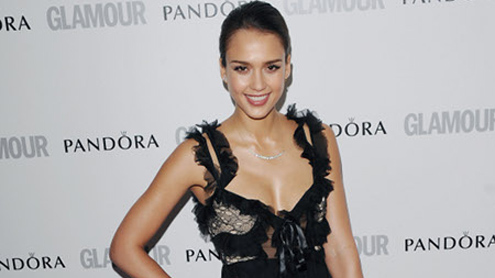 Jessica Alba dazzled in black as she attended the Glamour Women of the Year Awards in London last night.

The actress showed of her svelte post-baby body in a frilly chiffon gown with delicate lace detailing, a satin bow and full, flowing skirt. The brunette beauty teamed the flirty dress with a simple silver necklace and a black and white clutch. Keeping her make-up simple bar a slick of red lipstick, Jessica showed of her flawless features with a scraped-back hair do. The mother-of-two’s sartorial effort paid off, as she later took to the stage to be awarded the trophy for Entrepreneur of the Year. Eva Longoria, who was named Inspiration of the Year, set the red carpet alight in a bright orange Victoria Beckham design. The figure-hugging dress featured the label’s trademark zip detailing on the back and showed off the actress’ incredible figure to perfection. Wearing her hair in a sassy ponytail, the former Desperate Housewives star paired the bold frock with a pair of sexy nude patent heels and matching clutch.

Lea Michele also looked ravishing in a midnight blue mermaid gown with a draped asymmetrical neckline. The Glee star accessorised the stunning design with a pair of turquoise chandelier earrings and metallic high heels. The 25-year-old looked every inch the Hollywood sensation as she picked up the award for US TV Actress of the Year. Modern Family star Sofia Vergara opted for a sassy strapless leopard print dress in red teamed with black skyscraper heels. Wearing her hair in tumbling waves and accessorising her outfit with pretty drop earrings in the shape of leaves, the bombshell looked wonderfully feminine. The star took home the Comedy Actress of the Year accolade.

English model Kelly Brook flew the flag for Britain in an angelic white lace confection by Azagury. Featuring a high-neckline, the sheer top was embroidered with white flowers to preserve the 32-year-old’s modesty. Set off beautifully by her tan from the Cannes Film Festival, the star teamed the stunning dress with a summery blue clutch and delicate blue and bronze satin sandals. With her hair in a cute braided up do and incredible diamond earrings sparkling on her lobes, Kelly added a flash of colour to the ensemble with coral nails.-msn