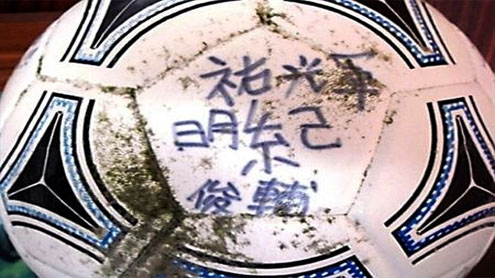 Alaska: A football that bobbed onto the shore of a remote Alaska island is likely the first salvageable debris from last year’s Japanese tsunami that could be returned to its owner, according to the National Oceanic and Atmospheric Administration.

The ball, found on Alaska’s Middleton Island, bears writing that identifies its place of origin, said Doug Helton, operations coordinator for NOAA’s Office of Response and Restoration, which is tracking debris from the tsunami.According to a translation provided by Tokyo-based journalists, the ball is from the Osabe School in the Iwate Prefecture, an area that was hit by the devastating tidal wave unleashed March 11 by the magnitude 9 earthquake off Japan’s northeastern coast, Helton said Sunday.

Beachcombers and cleanup workers in Alaska and the Pacific Northwest have found debris, including sports equipment, that was likely set adrift by the tsunami, Helton said. But this soccer ball stood out because it had identifying information.The ball was found by David Baxter, a technician at a radar station on Middleton Island, a remote site in the Gulf of Alaska.”We’re working with the guy who found it and the State Department and the consulate in Seattle to set up a process” to return the ball, Helton said.

Middleton Island, once the site of a Cold War-era Air Force station, is located about 75 miles southwest of the Prince William Sound village of Cordova. The treeless island is largely uninhabited, except for the radar station, which is used by the Federal Aviation Administration, and as a seasonal research camp for federal biologists.In Alaska, beach cleanup crews on the lookout for tsunami debris have found mostly floats and buoys from Japanese oyster farms. It can be difficult to determine whether Japanese items found washed up are from the tsunami or just part of the normal marine flotsam that accumulates every year, Helton said.

One other piece of tsunami debris with an owner positively identified by NOAA was an abandoned fishing vessel found adrift off Alaska earlier this month and sunk April 5 by the U.S. Coast Guard.The 170-foot Ryou-Un Maru, which had been scheduled to be scrapped by its owner prior to the tsunami, was considered a navigational hazard after it meandered an estimated 4,500 miles (7,242 km) in the North Pacific from a port in Hokkaido, according to the Coast Guard.Salvage of the ship was considered too costly and difficult, and the owner did not want the vessel returned, the Coast Guard and NOAA said. A Coast Guard cutter crew scuttled the vessel in the Gulf of Alaska. – Yahoonews