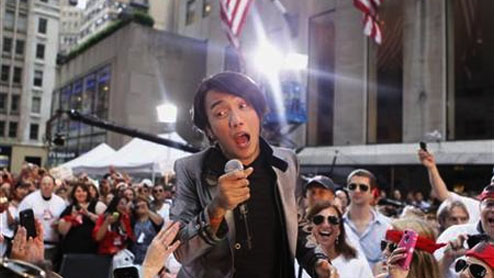 A little more than five years ago, as videos of Pineda performing Journey cover tunes played on YouTube, he sat at home in the Philippines on the verge of giving up his dream of a singing and songwriting career.But those YouTube clips eventually earned Pineda an audition for rock band Journey, whose hits of the 1980s include “Who’s Crying Now” and “Open Arms,” and he went on to become their lead singer in an unlikely career trajectory that is now part of Journey lore.

A look inside Pineda’s rise to fame and his struggles with rock ‘n’ roll stardom are the subject of a documentary that is playing at this week’s Tribeca Film Festival.”Don’t Stop Believin'” is named after the band’s hit anthem during the height of its success, and it represents Pineda’s own inspirational rise from begging on the streets in Manila to singing around the world in large stadiums packed with fans.Pineda, whose Filipino background initially surprised Journey fans who longed for the voice of former frontman Steve Perry, told Reuters he winced when watching himself on film.

“It was actually very difficult because, as we all know, I am not this Hollywood guy who looks great and tall,” he said.”But the other side of me was saying, this movie needs to be seen by a lot of people out there who have been dreaming to become somebody, to get recognized with their talents, with their God-given things they have in themselves.”The documentary follows Pineda from his nervous first audition to being on the Journey tour bus and inside hotel rooms with the band. Audiences see how Pineda handles the fame back stage before a show, off stage signing autographs and on stage, sometimes while sick, on a grueling first tour in which he tries hard to live up to fans’ expectations.

“It was difficult. We all have our limits, we get tired and whether we like it or not, we would feel itchy or not comfortable at some point. We just wanted our times alone. But since we signed up for it, whether we liked it or not we have to face the camera,” Pineda said.The worst part, he said, was the constant traveling without his family, being exhausted and trying to “sound golden all the time.” But he adds that it was uplifting “when you see these fans, smiling, happy, hugging each other, crying when they hear their favorite songs.”

It is difficult to know from watching “Don’t Stop Believin'” whether Pineda, now 44, hit it off well with his new bandmates. He said that while on tour they share stories, but their ages — several members the band’s current lineup are in their 50s and 60s — meant they often had different interests in life. Pineda called the Journey music their “common denominator.”Some critics said the film best captured the band’s rejuvenation.

“Not unlike Journey itself, “Don’t Stop Believin'” hits corny but impassioned notes, resonating emotionally even (or especially) through cliches. Certainly the film makes a case for the validity of the reformulated band,” wrote the critic for show business publication Variety.One of Pineda’s biggest fears was living up to Journey’s most famous lead singer, Perry, now 63, who left the band in 1987 and returned for three years in 1995.”I had to convince them I was the real deal,” Pineda said, who sang in clubs in throughout the Philippines and in Hong Kong but gave up his solo career when the Journey call came.

“This was the hardest thing that I have done in my life, though I’ve had my share of hardships,” he said.Pineda’s hard times include being homeless for a time and begging for money on Manila’s streets. He struggled with drugs and alcohol, and he filmmakers take him and his bandmates to some of his old Manila haunts in “Don’t Stop Believin.'”

The group currently is on a break from touring and will start again in July. Pineda is spending most of his break in Manila, where he has three boys and is expecting a baby girl in July with his wife.In the Philippines, his fame now is widespread. He is shown in the film meeting former President Gloria Macapagal-Arroyo.”I try to live under the radar as much as possible,” he said, even though he is constantly approached by fans for photographs, pep talks and events. “I tell myself, it makes them happy so why shouldn’t I give it.”And most of all, he wants his tale to inspire everyone. “Life begins at 40,” he said, “that’s what they say.” – Yahoonews