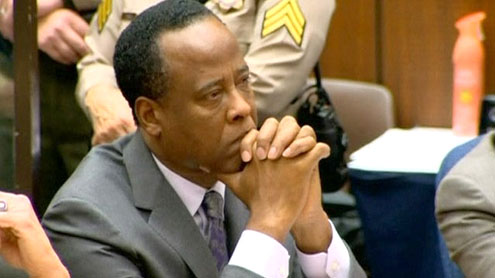 Conrad Murray, the US doctor convicted of the involuntary manslaughter of pop superstar Michael Jackson, has been sentenced to four years in county jail.

Murray was found guilty earlier this month after a six-week trial.Judge Michael Pastor told the court that while Murray was legally eligible for probation, he did not think his actions showed he was suitable.He said the evidence in the case showed a “continuous pattern of lies and deceit” by the disgraced physician.The legal teams will return in January 2012 to discuss the prosecution’s request for Murray to pay restitution to Jackson’s family.While the prosecution successfully argued for the maximum term, Murray’s lawyers asked that he be kept on probation, saying he is serving “a lifetime sentence of self-punishment”.

Defence lawyer Ed Chernoff said he would already be punished for life by being known as “the man who killed Michael Jackson”.In addition, Murray could still lose his licence to practise medicine.As the sentencing hearing began, lawyer Brian Panish, a family friend of the Jackson family, read a statement on their behalf.Expressing their sense of loss for their “son, husband, brother and father”, the statement said the court should impose a suitable sentence.”We respectfully request that you impose a sentence that demonstrates that physicians cannot sell their services to the highest bidder and lose sight of their Hippocratic Oath,” Mr Panish read.In a sentencing memorandum delivered to Judge Michael Pastor in advance of Tuesday’s hearing, prosecuting lawyer David Walgren said Murray had shown no remorse for Jackson’s death.

Defence lawyers argued that Murray had done a huge service to the community throughout his life, including donating supplies to Caribbean doctors and opening a clinic in the poorest area of Houston, Texas.”I do wonder though to what extent the court considers the entirety of a man’s book of life, as opposed to one chapter,” Mr Chernoff said, adding that Murray could better serve the community on probation.Michael Jackson died on 25 June 2009 from an overdose of the powerful anaesthetic propofol.He had been out of the public eye for several years but was preparing for a series of comeback performances at the O2 arena in London.

The defence argued that Jackson was a drug addict who caused his own death by giving himself an extra dose of propofol while the cardiologist was out of the room at the star’s rented mansion in Los Angeles.However, lawyers for Murray dropped a key argument midway through the trial – that the pop superstar had drunk the propofol. But they continued to argue that Jackson had somehow dosed himself otherwise.There is no law against administering propofol, but the prosecution’s case rested on the argument that Murray was grossly negligent by doing so outside a hospital setting and without the proper monitoring equipment.Calling for a four-year prison sentence, Mr Walgren said Conrad Murray had abused the trust placed in him by his patient.”It is the people’s position that prison is warranted.” – BBC