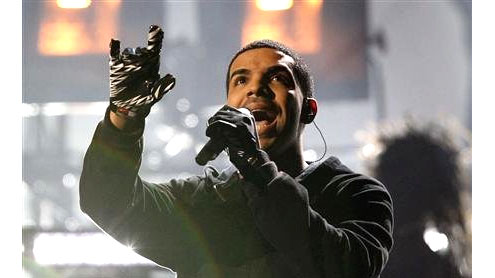 LOS ANGELES: Canadian singer Drake jumped straight to No. 1 on Wednesday on the Billboard Top 200 album chart with his latest offering “Take Care,” while Rihanna dominated the singles chart with three songs in the top 10.

“Take Care” is the second No. 1 album for 25-year-old Drake, who debuted at No.1 with his first studio album, “Thank Me Later” in 2010 after signing a recording contract with Lil Wayne’s Young Money Entertainment.His new album sold 631,000 copies in its first week, according to Nielsen SoundScan, for a strong debut topped only by two other No. 1 albums so far this year: Lady Gaga’s “Born This Way,” which sold 1.1 million copies in its first week, and Lil Wayne’s “Tha Carter IV,” which sold 964,000 on its debut.

Critics have received “Take Care” warmly, with Jon Garcia at AllHipHop.com rating it an eight out of 10, and calling it “intriguing, filled with top-tier production and emotional lyrics.”Rolling Stone Magazine’s Jon Dolan gave the album 4 out of 5 stars and said ‘It’s what Drake does best, collapsing many moods — arrogance, sadness, tenderness and self-pity — into one vast, squish-souled emotion.The holiday season has spurred sales of festive albums as Michael Buble’s “Christmas,” which held steady at No. 2. Justin Bieber’s “Under The Mistletoe” climbed to No. 5 and “Glee, The Music: The Christmas Album, Volume 2” debuted at No. 6.

British singer Adele’s “21” climbed back up the album chart to No. 3 while Andrea Bocelli’s “Concerto: One Night in Central Park” album debuted at No. 4. The “Now 40” music compilation fell to No. 7 and “The Twilight Saga: Breaking Dawn – Part 1” soundtrack fell to No. 8, despite the movie’s $283.5 million opening weekend sales at the worldwide box office.The top 10 albums were rounded out by Coldplay’s “Mylo Xyloto” at No. 9 and Susan Boyle’s “Someone To Watch Over Me” at No. 10. Last week’s No. 1, rapper Mac Miller with “Blue Slide Park,” fell to No. 24, making it the fourth largest drop from the top position in Billboard chart history.

Rihanna took over the Billboard Hot 100 singles chart this week, holding steady at No. 1 with “We Found Love” featuring Calvin Harris. She also claimed the No. 4 spot with her Drake collaboration on “Take Care” and debuted “You Da One,” the second single from her new album “Talk That Talk” at No. 9.The 23-year-old Barbadian singer will be competing for the No. 1 spot on the album charts next week with new releases by Nickelback, Daughtry, and Mary J. Blige.Rihanna’s “Talk That Talk” is currently holding the top position on the iTunes album chart, followed by Nickelback’s “Here And Now,” Drake’s “Take Care” and Blige’s “My Life II…The Journey Continues (Act 1).” – Yahoonews