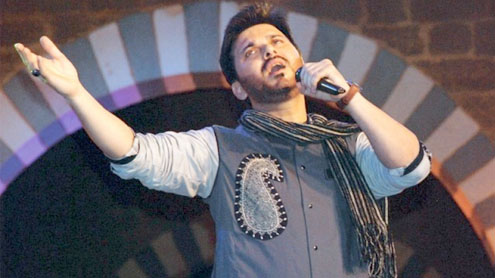 KARACHI: Bagh-e-Jinnah in Frere Hall, where the 17th PTV Karachi Centre’s Awards ceremony was held, was lit up on the evening of November 12.

While PTV is considered by many as the place where talent was nurtured and legends were born, the award ceremony was a disappointing affair as it was peppered with frustrating delays, mismanagement and the presence of just a handful of famous faces.

As one entered the venue, a little before 8:00 pm — the scheduled starting time was 8:30pm — the sound check was still going on and dance performances on Bollywood songs were being rehearsed. When the event finally started — an hour-and-a-half later than the stated time — the hosts failed to do justice to all those who had been waiting patiently. Lack of preparation was evident as the three hosts, Fahad Mustafa, Sabreen Hisbani and Fatima Effendi, forgot their lines one too many times and to add to that, they made no attempt to hide their poor grasp of Urdu, conversing mostly in ‘Minglish’. This was a shame as it testified to the fact that Pakistan’s national language is not given respect even on a state-run television channel.

Sufi folk performances
Skits, which were once the hallmark of PTV Awards ceremonies, were not presented this time around. However, the audience saw a delightful tribute to Sufi folk culture with various performances by both upcoming and established musicians.

Sufi pop band The Sketches, who rose to fame through “Coke Studio 4”, performed “Nind Nashe Vich” (based on poetry by Miran Fakir) and “Mand Waai” (a kalam by Shah Abdul Latif Bhittai).

Meanwhile, Komal Rizvi, who was propelled to fame by PTV in the 1990s, enthralled the audience with her rendition of “Dam Mast Qalandar” while Ali Haider kept up the tempo with his Sufiana kalam, from his latest album Bulla Ki Jana Main Kaun.  Adding to the festivities was folk singer Tufail Sanjrani who performed legendary Sufi poet Sachal Sarmast’s poetry “Allah Hoo”  and Ahmed Jahanzeb who sang “Khuda Aur Mohabbat”.