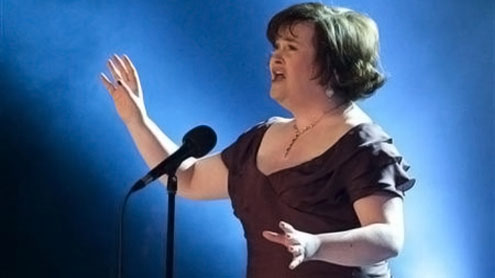 LONDON: Scottish singer Susan Boyle, a worldwide sensation since appearing on a TV talent show in 2009, shot straight to the top of the British chart on Sunday with her new album, “Someone to Watch Over Me,” the Officials Charts Company said.

Boyle, notching up her third No. 1 album in a row, has sold some 14 million albums worldwide and has been No. 1in 30 countries.Cher Lloyd, 18, an “X Factor” finalist last year, saw her debut album, “Sticks and Stones,” enter the chart at No. 4, while The Wanted took the No. 5 slot with their second album, “Battleground.”

Barbados-born R&B singer Rihanna topped the singles chart with “We Found Love,” featuring Scottish DJ and producer Calvin Harris. The single bounced back to the top from last week’s No. 2 and has now spent four weeks at No. 1.Boy band JLS was the highest new entry in the singles chart, at No. 2 with “Take a Chance on Me,” the second single from the forthcoming album “Jukebox.” – Yahoonews