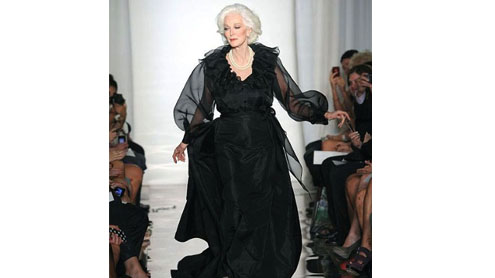 It isn’t that Carmen Dell’Orefice is a raving, cockeyed optimist. But she has taught herself to winkle out the positive. “The alternative, at my point in life,’ she remarks lugubriously, “is unacceptable”.

In pictures: Carmen Dell’Orefice’s 60 years in fashion
That point is 80. And the life is extraordinary; a film waiting to be scripted. Impoverished immigrant parents (mother a Hungarian ballerina, father an Italian violinist; she was born in New York); foster homes; rheumatic fever at 12, which put paid to her own balletic ambitions; modelling at 13 (she made her first Vogue cover by the time she was 15); three husbands of varying unsuitability; numerous spectacularly catastrophic financial scenarios, of which depositing most of her life savings with Bernie Madoff is merely the most recent.

On the plus side, the finances mean she still has to work. And the work is a saviour, even though the day I visit her on a shoot in New York she was up at 4.30am. “It’s my hips. They get so stiff,” she recounts dispassionately.

Carmen Dell’Orefice: eternal grace
The arthritis is a downer, but her eyelashes are amazing, I say, thinking they can’t possibly be her own. “Well, they are,” she counters. “So’s my beard. And I have to pluck it every day, for your information”.

So much for the haughty reputation. I think that must come from her posture. And those fabulously snooty-looking portraits from the Fifties by Horst, Avedon, Penn and Parkinson. She has worked with all the greats. Had affairs with quite a few of them, too, including Norman Parkinson, who was responsible for her second career. She bumped into him at a party, aged 41, and he told her she wasn’t looking too bad “for an old bag, and that I should go back to work”. Dalí painted her. Dietrich cleaned her kitchen. The names flutter in and out of her conversation, but only when prompted.

She is not one for meticulously archiving her back catalogue. Most of her pictures were stuffed under her bed until her friend, the illustrator David Downton, persuaded her to put them in order. The result is an exhibition in London, about which she is marginally dismissive. She hates the idea of living in the past and is, in any case, far too busy. Her schedule is a gratifying affirmation of her enduring appeal, although she does get a bit bored with “the bad designers who try to put me in leather pants that I’d never wear”.

She’s not complaining, merely stating fact as she sees it. Let them be bad and let her figure how far she’s prepared to indulge them. “I’m a working woman of 80 trying to work out what the image I can project is. How I can do it with, you know, dignity”.

Pretty well, it seems. There are the Rolex ads, the catwalk shows and the numerous appearances in magazines such as Madame and V . She is still a room-stopping beauty; a testament to the indestructibility of good bone structure, that ramrod posture, generous shots of silicone and self-discipline (in 1944, when fashion editor Diana Vreeland told her to grow her neck by an inch – she did).

Before Carmen, models didn’t work much beyond 24, let alone 80. “Well, nor did I – originally,” she says coolly. Her first retirement was in 1959. She’d been married for two weeks, to her second husband, Richard Heimann, a photographer. The retirement, she suspects, was the beginning of the end of that particular relationship.

The husbands – Heimann was number two – do seem to have been a bit testing. No wonder she went grey when she was 19 – she finally stopped dyeing it when she was 43. She met husband number one when she was 15 and married him at 19. He doesn’t sound very reliable. She bought him race horses, had abortions when he said he didn’t want children, had a daughter anyway, then called it quits when she was 24. Her third husband, Richard Kaplin, was an affluent East Coast architect who also turned out to be a drug addict, pushing pills, Dell’Orefice later discovered, on her daughter Laura – who later became a drugs counsellor.

‘Trendy tokenism? Older models are here to stay’
Interestingly, she continued to support her husbands (“I was the one who kept telling my second husband he should become a cinematographer. I paid for him to get his director’s card, and he went on to film Godspell , so, you see, I have a good eye”), paid for an apartment for her father, put her mother through college and then later bought her a house upstate. She’s currently helping Laura, who has been made redundant by the state of California. Such generosity, despite the fact her father was absent for much of her childhood.

Her mother’s maternal instincts weren’t entirely cosy either, not by today’s standards. “But that’s just it,” she remonstrates. “I’m not interested in today’s prejudices. My mother was harsh and constantly told me I had jug ears and heaven knows what else. But she was devoted and a hard worker. As for my father – my mother said he was a son of a bitch who never did a thing for me. She couldn’t understand why he ‘got all the love’ as she put it. But he was there when I needed him.”

She’s not much for theoretical dogma. Women’s Lib? “My answer was please don’t liberate me. I worked so hard to be what I am. I respect Gloria Steinem enormously. But I never wanted to be in any kind of movement – and if you’re over a certain age, you better keep your bra on because nothing’s worse than saggy duds. And guess what? Women have it harder than ever now because they’ve changed the dialogue, and men don’t know what to do when they can’t marry their mothers.”

Older models: the golden girls
To the young, Dell’Orefice is an awe-inspiring mould-breaker, everything a supermodel should be – imperious and fearless. But the idea of being princessy appalls her. She was brought up to be frugal, make her own clothes. Whenever she and Suzy Parker, the Fifties mannequin who was one of Coco Chanel’s favourites, went to Europe, they always took a sewing machine with them, so they could make their own evening outfits as the invitations rolled in. She’s not sewing so much anymore because her dining table is full of papers. “Even with a computer, I can’t get rid of all the papers in my life. The banks always want something. They’re deciding even now whether to shovel me out of my little apartment…”

But a mould-breaker? She doesn’t really buy it. “I did what I had to do because there was no role model showing me any different. I made it up as I went along.” I ask if she has given up on men, given that her last liaison introduced her to Madoff. “There’s always a boyfriend,” she cackles. “Whatever else I have to give up on, I won’t give up on love.” – Thetelegraph