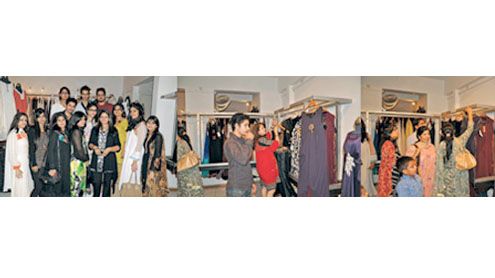 A large number of people visited the exhibition, while designers were seen overjoyed due to overwhelming response as a large number of dresses were sold before the formal inauguration of the exhibition. The exhibition, focusing on upcoming occasion of Eid-ul-Azha, included cocktail and long shirts and traditional and contemporary dresses with embroidery work. Majority of outfits were of dark colours as it was a winter collection by Asian Institute of Fashion Design.

No doubt, Mohammad Adil grabbed the limelight of the exhibition as about 20 dresses, being designed by him, were sold out before the formal inauguration of the exhibition and even on first day, soon after the commencement, a larger part of his designed outfits were sold. He brought a latest idea of using ‘Turkish scarf’ shape dresses. He also experienced Indian Banarsi prints and cotton as well. His collection was reflecting true fusion of eastern and western cuts. He said that he loves to play with cotton.

To a question, he said that people showed overwhelming response to his designs inspired by the Turkish scarf. He said that due to his hard work and dedication, he was hoping for a positive response, but such massive response in a very short time period had surprised him.Mehwish Shahid designed eastern cuts in beautiful colours in accordance with winter season, as well as western dresses. Sumera Baghdadi designed long shirts with embroidery in yellow, black, brown, crimson and other colours.

Sana Saleh Muhammad designed cocktail and long shirts with printed cloth in matching and contras colours. She used net on dresses in an appropriate manner. Mzna Zubedi used wonderful cuts, while experimenting in eastern shirts with beautiful embroidery.She also designed typical western dresses.Talking to Daily Times, she said that she also exported her designs to the United States (US). Pakistani community at the US likes Eastern type dresses, as compare to the people in major cities of Pakistan, who were interested in contemporary cuts, she said. Sidra Ajmal designed semi formal sober styles in white eastern dresses inspired by Indian touches, having less embroidery, based on cuts.