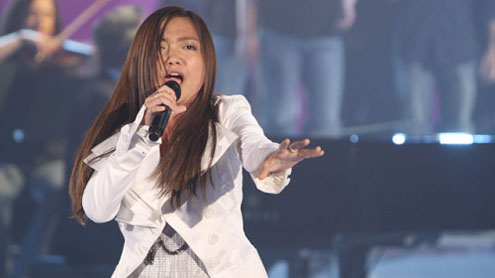 Asian singing sensation Charice has rocketed to fame after being discovered in a YouTube video.

The 19 year old star is fast becoming an international celebrity who has not only made it on stage but is making a name for herself in Hollywood. Teenage singer Charice says she’ll play an exchange student in US series Glee.The 18-year-old says her character, called Sunshine, will be a rival to Rachel Berry in season two of the show.She said: “In the first episode we’re going to have a singing catfight in the bathroom and we’re going to be singing Telephone by Lady Gaga and Beyonce.”Aside from Telephone I’m going to be singing Listen by Beyonce and that’ll be my audition to join Glee club.”

The singer, whose debut UK single Pyramid is out this week, started her career in the Philippines two years ago at the age of 16.She became the first Asian artist to make it into the top 10 of the US album chart earlier this year with her debut international release.Charice appears in the first episode of the second series of Glee and says she only found out about getting her role by chance.She said: “I’d been watching it and I said to my mum, ‘Why don’t we try?’ So I just auditioned for it.

“I found out that I was part of the cast on Twitter and I didn’t believe it, because it was on Twitter. But then they emailed me to say congratulations.”Sunshine is a nerdy one and a shy type. That’s why I like this role.”Oprah Winfrey described Charice as “the most talented girl in the world” after an appearance on her TV show in 2008.

That and other slots on US talk shows led to an international recording contract.She’s also brought out two cover albums in the Philippines.Charice describes her sound as pop and R&B and says she’d love to work with fellow teen star, Justin Bieber.She said: “I would love to collaborate with him but he’s pretty big. I’m hoping.” – BBC