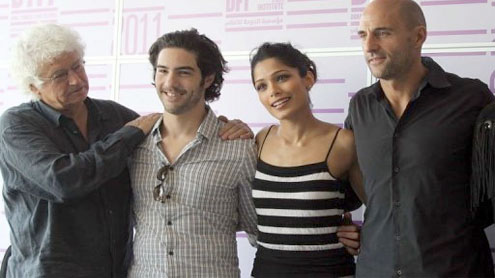 Starring Antonio Banderas and Freida Pinto, Black Gold tells the story of two emirs locked in a feud after the discovery of oil, as a young leader emerges to unite the desert tribes.Omar Sherif and Lebanese director Nadine Labaki were on the red carpet for the opening as well as Pinto.US actor and the founder of New York’s Tribeca Film Festival, Robert De Niro, helped to organise the first Doha festival in 2009.

New York’s Tribeca Film Festival was launched to boost cultural life in Manhattan after the September 11, 2001 terror attacks.Doha launched its festival this year four days after the end of the Abu Dhabi Film Festival, in what is seen as a growing cultural competition between Gulf cities. Dubai is holding its own festival from December 7 to 14.Film festivals in the Gulf states, spared the uprisings across the Arab world, have stolen the limelight this year after Damascus and Cairo cancelled their annual events due to unrest in both Egypt and Syria. – Khaleejnews