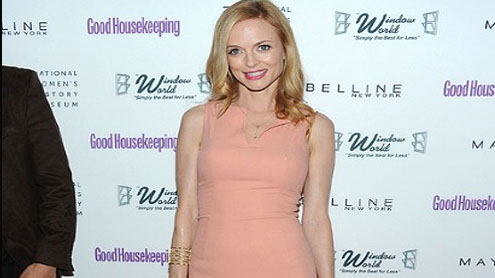 Across the pond in New York City last night, it looked like perhaps the “children” of the showbiz world – think Blake Lively (she of endless golden-skinned pins, age 23), Emma Roberts (purveyor of the creamiest complexion, 20) and Olivia Palermo (the foxy, fashion-forward one, 25) – had eschewed the glitz and glamour of red carpet for one rare evening.In their absence, a polished breed of fortysomethings seamlessly stepped up to the plate and craftily stole the less-is-more thunder from right under Lively and co’s twentysomething noses.In pics: Celebrities who are similar in age, drastically different in styleFirst up: British Estée Lauder spokesmodel Liz Hurley, 45 (who, to be honest, doesn’t often feature on fashion.telegraph.co.uk for her style credentials), was the epitome of “Fabulous at Every Age” – which, funnily enough, was the title given to the Harper’s Bazaar event that she was attending.

Positively glowing, her well-chosen asymmetric LBD by Cushnie et Ochs accentuated her toned physique, and there was not a hint of cleavage in sight. Now we can really see why cricket champ Shane Warne gets so “Horny Warney” for this hot mama.Down the road at Good Housekeeping’s “Shine On” event, actress Heather Graham was doing just that. A blush, figure-hugging dress by L’Wren Scott which ended just below the knee complemented her peachy complexion and bright eyes. Graham, 41, has the legs for a mini, but displayed her flair for the demure.And it doesn’t stop there: at 42, Christy Turlington showed how she hasn’t left those infamous supermodel genes on the catwalk. Looking comfortable in front of the flashbulbs in a navy, nipped-in Louis Vuitton dress, simple black accessories completed her look, while a natural approach to hair and make-up revealed what a true beauty she still is. – Telegraph