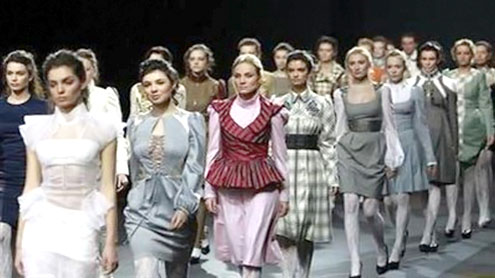 MOSCOW: Underfunded and lacking encouragement, Russia’s young designers say they are struggling to break into the country’s fashion circles, which are still ruled by Soviet-era big wigs.”Fabrics are unavailable, we get minimal material to work with and young designers don’t have money,” said Aminat Kaaeva, a 26-year old native of Russia’s troubled Chechnya region.At a recent fashion show in Moscow, Kaaeva showed off ankle-length dresses inspired by Middle Eastern designs as part of a show dedicated to eight young designers.”It’s no surprise that the level of our fashion weeks is below the European bar,” she told Reuters. The young designers’ show was one of almost 50 at the fashion week.Though Russia has access to Western fabrics, ideas and inspiration made available since the fall of the Soviet Union 20 years ago, its gurus lament a stagnant industry which limps behind its European counterparts such as Milan or Paris.

Top designers like Slava Zaitsev, a 73-year-old Soviet icon, have complained that the government does not give enough funding to new designers, especially to the young.However some purposely avoid the lure of the West, despite scholarships and more promising audiences.Female designer-duo — Moscow students Anastasiya Seregina and Tatiana Reznik — have taken inspiration from Russia for their latest collection of winter sportswear.White, one-piece ski suits heavily featured in their show. They said they wanted to evoke a snow leopard, one of the recently chosen mascots for Russia’s 2014 Winter Olympics.”We don’t expect to sell the collection, that would be aiming too high,” sighed Seregina.”But if we could at least insert a new trend in winter sport clothes, that would be good,” she said.Both Reznik and Seregina said that regardless of the lack of funding given to Russian fashion, they want to design locally. – Yahoonews