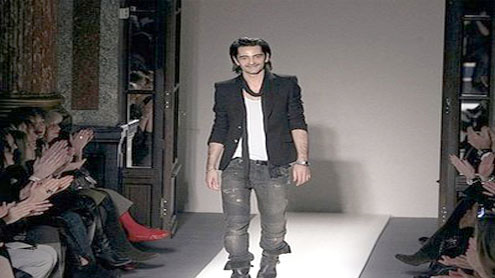 PARIS: Balmain has parted ways with Christophe Decarnin as its creative director for women’s ready-to-wear collections, the Parisian fashion house said on Wednesday.In a statement, Balmain announced “the end of its collaboration” with the French-born designer, whose absence from its fall-winter show in Paris last month prompted rumours that he was suffering from depression.

“Christophe Decarnin’s work with the house’s design team contributed to the success that the brand has enjoyed in recent years,” chief executive Alain Hivelin said.His successor is to be named in a matter of days, added a Balmain spokeswoman who refused to elaborate on the circumstances behind the split.Decarnin joined Balmain in 2005 as a designer after seven years at Paco Rabanne, and was promoted to creative director in 2007.His rock-influenced creations — skinny leather jeans, military jackets and a torn Old Glory tank top that costs 949 euros ($1,350) on Net-a-Porter — revived Balmain’s fortunes after its mid-decade brush with bankruptcy.Another big name in Parisian fashion, Christian Dior, has yet to name a new chief designer after its abrupt firing last month of John Galliano, who is facing trial on charges of making racist and anti-Semitic remarks. – Yahoonews