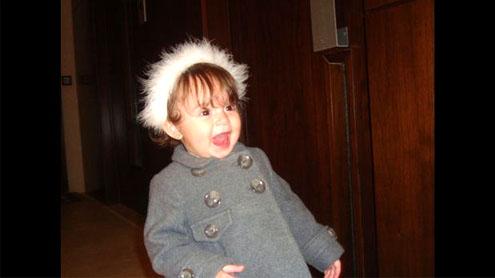 Children are known to be clueless and careless when it comes to keeping their outfits clean all the time. They cannot care less what they wear as long as it’s comfortable and they can drool all over it when they want to.On the other hand, many mothers are obsessed with dressing their newborns in high-end designer clothing, and make an effort to make them look their best.

This is also something that is widespread among many young Saudi mothers who spend huge amounts to dress their babies in designer labels such as D&G and Gucci.Celebrity mothers were the first to start this trend as they came up with ever more ways to shower their children with bling! From Suri Cruise (daughter of Tom Cruise and Katie Holmes) to Shilo Pitt (daughter of Angelina Jolie and Brad Pitt), there are many celebrity children who make the headlines just for wearing expensive clothing.Saudi mothers are following this trend by shopping for clothes for their children from designer shops. “Every mother wants to treat their children like little princesses and princes. We do it best by buying them all sorts of things, regardless of whether they need it or not,” said Maha Al-Khatieb, a 28-year-old mother of two.

“I usually buy my daughters clothes that match mine to make us stand out. It makes sense if I’m wearing designer brands that they do too,” she added.From Burberry, Dior, D&G, Gucci, Armani to Ralph Lauren, Saudi children have been spotted wearing clothes that are suitable for royalty. “I usually dress my son in Ralph Lauren Polo shirts and Emporio Armani because that’s exactly what his father wears and I want them to look the same,” said Lamees Al-Alawi, a mother of a six-month-old baby called Abdulmalik Atallah.“I don’t care how much money I spend on him as long as I’m happy with how he looks and as long as he is comfortable wearing it. Nothing is too expensive for my baby boy,” she added.Saudi mothers also try to dress their young girls in a way that they look elegant and feminine. “My baby girl always puts on my shoes and tries to walk around the house in them. It is natural for girls to always try to copy their mothers. This is something that pushed me to buy my daughter, Yasmeen, clothes made by Burberry and Dior, and customized miniature shoes so she can be an adorable mini version of me,” she said.Headbands and accessories are essential to make little girls complete the look, said Sara Al-Azem, a 26-year-old mother. “My two-year-old is obsessed with headbands, I cannot let her leave the house without wearing one. I think I made her get used to it when she was younger but now she wants her headband everyday,” she said.

“My Sama is attracted to accessories and bling, which makes me want to always get her new accessories that match her cute outfits,” she added.Dr. Kholoud Barradah, a dentist and mother of a two-year-old girl, said it is fun to dress one’s daughter in different outfits before they grow old and cannot be bothered by one’s taste in style. “My young daughter is always treated like a little princess, which makes sense since she is dressed like one,” she said. “I remember when I was young I used to like dressing like fairytale princesses but times have changed and I guess wearing designer outfits is the cool thing nowadays,” she added.Dressing like a man, not like a child, is what Bayan Abuzinadah wants to do with her three-year-old son. “I always try to match Youssef with me and his father so we match each other in subsequent photographs,” she said. “You can always see Youssef in True Religion jeans and T-Shirts from either Baby Dior or Burberry.

You have to admit my child rocks in his casual clothing,” she added.Some mothers who dress their children in designer clothes often remain overly concerned with keeping their clothes clean. “I’m always around my children — Ayah and Al-Waleed — and I make sure that their clothes are clean and they look good. I am the person who feeds them and dresses them and make sure that they don’t spoil or damage their clothes,” said Dania Bogari, a mother of two.“I usually shop for my children from the same places where I shop for myself. I’m just familiar with the clothes and the designs and I always look for quality before anything else because I want their clothes to be worn more than once,” she added.Some Saudis consider spending a fortune to make your baby look glamorous crazy and say the money should be invested for their future.I would rather spend that much money on their education not on their clothing,” said Malika Alam, a 38-year-old mother of three. “I want them to grow up to become smart and educated children, not stylish and glamorous. What would I do with a fashionable child who does not know how to write a decent essay? – Arabnews