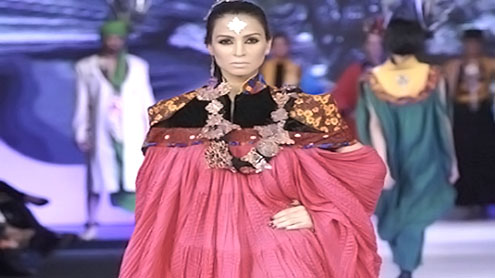 The second day of Pakistan Sunsilk Fashion Week, opened in Lahore on Tuesday,29 March, has been cancelled because of the Cricket World Cup semi-finals match between historic rivals and neighbours, India and Pakistan.The crucial game, nicknamed ‘clash of the titans’ by the leading national daily, Dawn, is taking place on Wednesday, March 30, and it has struck a body-blow to the city’s premier fashion event.On the same day, six of Pakistan’s leading designers were due to present their luxury ready-to-wear collections on the Lahore catwalk.But all declined.India’s models accuse fashion industry of racism.”No designers wanted their shows to be on the same day as the cricket” said a spokesman. “They knew there would be nobody in the audience; everyone in Pakistan is going to be watching the match. It’s history.”

The schedule was hastily rearranged at an emergency meeting, and the six shows planned for Cricket Day were given alternative slots.The India versus Pakistan cricket match is not the only place the two countries find themselves at loggerheads.Fashion officials in Lahore are congratulating themselves on the fact the majority of models appearing in their fashion week are from Pakistan, following claims of discrimination and prejudice by several top models in India, who have spoken out about their country’s apparent obsession with pale skin which they say dates back to British colonial rule.”We’re quite proud of the fact that most of our designers prefer to use Pakistani models” said Mrs Sehyr Saigol, the chair person of the Pakistan Fashion Design Council’s executive committee.The Lahore fashion event features 25 female models, of whom at least 22 are Pakistani, and 10 male models, most of whom are from Lahore.”Pakistani girls are amongst the beautiful in the world. Why would anyone want to use models from anywhere else” Mrs Saigol said.The third Pakistan Sunsilk Fashion Week opened yesterday,29 March, at the new Expo centre in Lahore. – Telegraph