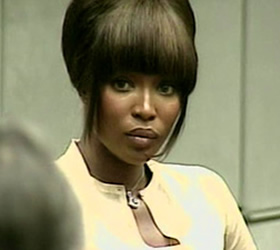 Supermodel Naomi Campbell has told Sky News she was “used as a scapegoat” in the trial of former Liberian President Charles Taylor in the Hague.

Her comments, in an interview with Sky’s Paul Harrison, came as she celebrated 25 years working in the fashion business.

“What you have to understand is, I was not on trial. I was forced by subpoena to testify, ” she explained at the London Fashion Week celebrity bash.

“It was nothing to do with me. This trial has been going on for how many years and no-one cared to write about it?

“You bring Naomi Campbell to the stand and the whole world knows. So as far as I was concerned, I was used as a scapegoat.”

“But I’ve been extremely blessed and all I want to know is that I’ve made a difference and opened the door for other women of colour who are coming behind me.”

In August, the catwalk model testified that she’d received what she called “dirty-looking stones” while attending a charity dinner in South Africa.

But she told the tribunal she didn’t know who they were from or that they were diamonds – assertions contradicted in testimonies that followed.

“I told and remembered what I could to the best of my ability – it was 13 years ago,” she said.

“And I don’t see why I should sit here, or wherever I go around the world, as if this was my trial. I was a witness.”

As a 40-year-old, Campbell says her priorities have changed.

“But I’ve been extremely blessed and all I want to know is that I’ve made a difference and opened the door for other women of colour who are coming behind me.”

Campbell insists she holds no grudges, tries to forgive people and hopes in turn that people forgive her.

Putting behind her dark chapter in a colourful career, the model added: “My life goes on.

“I helped as much as I could and anyone who sees that differently and thinks it was my trial, well, there’s nothing I can do about that.” – Skynews