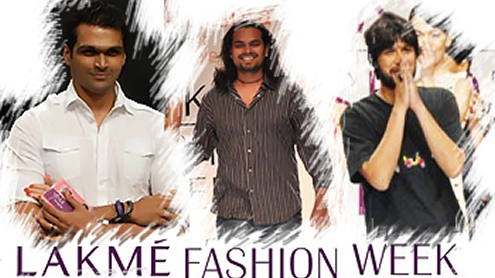 Just seven days to go for Lakme Fashion Week Winter/Festive 2010. Since Lakme’s GenNext category completes five years this season, they have organised a special ‘GenNext 5 Year Show’ to commemorate the same. Ten designers who were part of the GenNext category since it started in 2005 will present just five chosen pieces each in this show.

We list five designers who stand apart from their counterparts not just because they are talented but they have found their signature design aesthetic and have carried it forward successfully.

Nachiket Barve:
Fashion designer Nachiket Barve hails from a family of doctors and he creates lovely feminine garments for women. The designer says, “I feel every designer should have his unique design signature or handwriting. I want my clothes to be timeless so that you can mix-and-match and create fresh looks.”
For the special GenNext show, Nachiket’s collection titled  ‘Neo-Sophisticate’ (see pic above) will showcase garments that have the designer’s trademark technique and have a wide array of colours to appeal to a larger audience.
You have to check out separates and overlays by Nachiket that keep your look interesting with the unique use of textures and colours making them ‘timeless’.
Anuj Sharma:
Creativity meets its purpose in the simplest and easiest ways. Taking this diktat forward is fashion designer Anuj Sharma. His genius lies in his approach of creating an innovative design using the most simple approach.
For a collection titled button masala, the designer took a piece of Noel khadi cloth and stitched buttons two inches apart from each other. The result – the buttons can be put together in 100 different ways to create dresses, pyjamas, shirts et al of different lengths, sizes and fit. At LFW Winter/Festive 2010 special GenNext show he’ll present button masala part deux. Yes, you must not miss his genius!
Rahul Mishra:
Rahul Mishra’s name has become almost synonymous with handloom ever since he presented the Kerela collection in 2006. The designer informs that pieces from the Kerela collection were all sold out but even today there is a huge demand so he can’t stop production of his very first collection!
At the GenNext special show, he’ll showcase garments that represent his explorations as a designer since he started out. So, who is his fashion idol? Pat comes the reply, “Mahatma Gandhi!”
Swapnil Shinde:
Fashion designer Swapnil Shinde’s garments are glamorous and futuristic. The designer shares that he has picked five of his favourite pieces over the years that he has showcased at Lakme Fashion Week. These pieces were either worn by his showstoppers or show starters and have been reinvented slightly to meet the needs of this season.
Aneeth Arora:
Aneeth Arora has remained true to eco-conscious fashion. Her strength is to use indigenous Indian handloom to create garments with a global appeal. Perhaps that’s why her collection at LFW special GenNext show is called ‘Global Local’. Here’s one Indian designer who wants to optimise the best that Indian handlooms and karigaars have to offer and make them commercially viable in the international fashion market. Let’s say three cheers to that! – Idiva