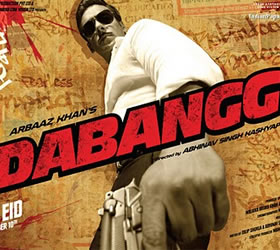 Hundreds of fans of Bollywood actor Salman Khan and hordes of curious onlookers in Hyderabad mobbed him and Sonakshi Sinha during a promotional event of his forthcoming film ‘Dabangg’ in the Twin Cities of India’s southern Andhra Pradesh.
Virtually an ‘all in the family’ affair, the movie stars Salman Khan, his brother Arbaaz Khan and wife Malaika Arora Khan, besides Sonakshi Sinha, Sonu Sood, and veterans Vinod Khanna and Dimple Kapadia.

The fans at a mall mobbed Salman and his co-actor in the film Sonakshi Sinha, as the people were trying to come close to them. Khan’s bodyguards got in a brawl with the public, but no one was hurt.

Reportedly, Khan also brushed some of the people back to make his way to the car. Hyderabad has witnessed such a situation earlier also when Khan went to the city to promote his film ‘Veer’.

The film ‘Dabangg’ is about the lawlessness in the northern states of Uttar Pradesh and Bihar, and the corrupt police. The film is slated for a worldwide release on September 10. – Dunyanews