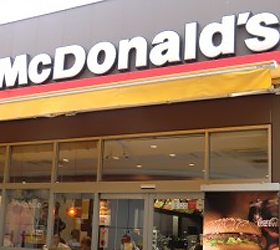 With the end of the “eco car” rebate set for the end of September, the government has run out of stimulus plans and seems no closer to reversing Japan’s dangerous spiral of deflation. Consumers now expect prices to continue to drop, putting pressure on retailers to cut them even more. The latest company to join the cost-cutting frenzy is McDonald’s, which hardly needs to attract more customers. The ubiquitous U.S.-based hamburger chain and bete noire of the global slow food movement has remained above the competitive fray with profits that almost defy reason and only serve to reinforce the company’s unique brand position.

Nevertheless, McDonald’s Japan announced on Aug. 12 that it was cutting the price of a Big Mac to ¥200 from Aug. 17 to Aug. 26. Normally, a Big Mac costs between ¥290 and ¥320, depending on the location. During a press conference on Aug. 4, the president of McDonald’s Japan talked about the gyudon (beef bowl) war that took place earlier this year among the main three gyudon chains. Though he said that his company initially didn’t feel that the war had anything to do with McDonald’s, eventually they came around to the realization that lunch prices had been irrevocably reduced as a result. Zensho, the company that operates the biggest gyudon chain, Sukiya, saw its sales increase by 30 percent; and even after the war was over and prices rose (though not back to the original level) business was better than it was last year. The same went for the second-biggest gyudon chain, Matsuya, though revenues weren’t as big as Sukiya’s. No. 3, Yoshinoya, didn’t see any appreciable change after the war, probably because its prices, even after the discount, remained higher than those of the other two chains.

Consequently, McDonald’s, which can certainly afford it, has decided it needs to compete more aggressively for the lunchtime crowd and thinks that the Big Mac is the best weapon in its arsenal. And whatever the company loses in profits for the Big Mac it gains by not having to advertise the discount. McDonald’s has received enormous free coverage of the deal on TV news and in tabloids. That’s the main advantage of being one of the biggest companies in the world: Whatever you do, the media reports it. Though the discount period is only 10 days, it’s likely that the price will not return to its former level. McDonald’s has already done quite well with the breakfast crowd by reducing its McGriddle product from ¥200 to ¥100 on an indefinite basis – Japantimes