by ToP
in Education, Featured
0 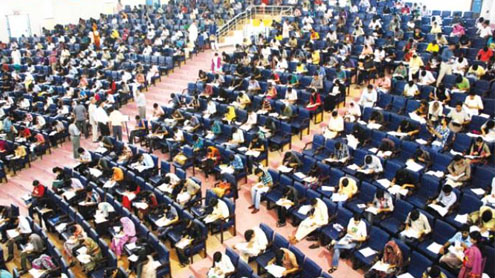 LAHORE/Peshawar: The University of Engineering and Technology (UET) Lahore Sunday conducted a combined entrance test for admissions in engineering institutions of Punjab.

As many as 45,000 candidates appeared in the test for about 5,000 seats which was held simultaneously at UET Lahore, UET Taxila, BZU Multan, Islamia University Bahawalpur, NFC Institute Faisalabad, University of Gujrat, Siddeeq Public School Rawalpindi, Dr AQ Khan Institute Mianwali and LGU Lahore.    Special measures were adopted to ensure secrecy and transparency of the test. The test was conducted in a peaceful environment and no untoward incident was reported. The result of the test will be declared on August 25 and would be available at web link.

Entrance Test for the session 2013-14 of the University of Engineering and Technology Peshawar (UETP) was successfully held on Sunday simultaneously at Islamia Collegiate, University of Peshawar, Ayub Medical College Abbottabad and Grassy Ground of Saidu Sharif Swat.The test was conducted by the Educational Testing and Evaluating Agency (ETEA) of KPK government. Around 15,000 candidates from KPK including Fata, AJK and Gilgit Baltistan sat for the test. The results of the test will be announced on August 20.

This was announced by director admissions, AIOU Syed Zia-ul-Hasnain said that admission forms and prospectuses for all programmes can be obtained from the sale points at main campus of the university in Islamabad, regional campuses and coordinating offices across the country.Director admissions informed that late fee charges of Matric Rs.100, Intermediate, PTC and BA Rs.200 and Postgraduate/B.Ed Programmes are Rs.500. Admission forms alongwith the required fee, he said can be submitted at the nation- wide branches of Habib Bank Ltd, First Women Bank, Bank Alfalah, Allied Bank and at the designated branches of National Bank of Pakistan and Muslim Commercial Bank. – Nation