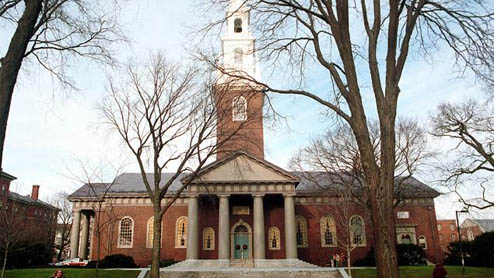 Harvard University has doled out academic sanctions to dozens of students after a cheating probe connected to an open-book, take-home final exam.

The school implicated as many as 125 students in the scandal when officials first addressed the issue last year.The inquiry started after a teaching assistant in a spring semester undergraduate-level government class detected problems, including that students may have shared answers.In a campus-wide email Friday, Faculty of Arts and Sciences Dean Michael D. Smith said the school’s academic integrity board had resolved all the cases related to the cheating probe.

He said “somewhat more than half” the cases involved students who had to withdraw from the college for a period of time.Of the cases left, about half the students got disciplinary probation. The rest weren’t disciplined.Some athletes became ensnared, including two basketball team co-captains whom the school scratched from its team roster. Past reports in The Harvard Crimson also linked football, baseball and ice hockey players to the scandal.Smith said in Friday’s email that the school wouldn’t discuss specific student cases.

The dean said a school committee is working on recommendations to strengthen a culture of academic honesty and promote ethics in scholarship.“This is a time for communal reflection and action,” he wrote. “We are responsible for creating the community in which our students study and we all thrive as scholars.”Staples founder Thomas Stemberg, a Harvard graduate whose son is a student now, on Friday criticized the school’s handling of the probe.“If you challenge the entire faculty at the Harvard Business School and the Harvard Law School to come up with a process that took more time, cost more money, embarrassed more innocent students, and vindicated guilty faculty … that could not have outdone the process that took place,” he said.

Stemberg, a supporter of Harvard’s basketball team, knows some of the students caught up in the scandal and his son knows others.He wrote a complaint letter to Harvard’s president in early January claiming that the professor who taught the government class changed the rules after several exams in which “open collaboration” was encouraged.He alleged that for the take-home exam in question, instructions to students said they couldn’t collaborate with professors, teaching fellows “and others.”

“If the message was so clearly expressed, why did some of the teaching fellows go over the exam in open session … If they did not get the message, could one expect the students to understand it?”Stemberg went on to say that while some students “went too far, literally cutting and pasting their answers,” others only wrote answers from notes “derived in the collaborative atmosphere the class encouraged.”The class was known as “Introduction to Congress,” and widely seen on campus as an easy way to get a good grade.

Harvard Undergraduate Council President Tara Raghuveer said Friday that the cheating investigation has been a hot topic on campus for months. She said some students started the new school year without knowing if they’d be allowed to finish it because of the lengthy period of time the probe took.The 20-year-old junior also said there are a lot of questions about whether the take-home exam’s instructions were clear enough when it came to expectations about group work. She said both students and professors are being careful to discuss collaboration policies now.

Raghuveer also said the school community should make an effort to embrace the students who withdrew for disciplinary reasons when they come back to campus.“The students who are implicated in this scandal from last spring still need to be recognized as members of our community … They shouldn’t feel alienated from Harvard,” she said. “This was an unfortunate incident. Students are being punished accordingly.” – KahleejNews