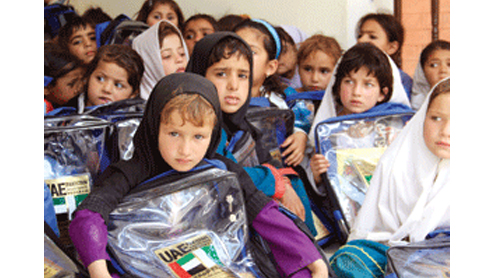 Following the initiative launched by the President, His Highness Shaikh Khalifa bin Zayed Al Nahyan, aimed at supporting the education sector in impoverished Pakistani areas, the Emirati project has come to fruition, resulting in handing over 45 educational projects in Khyber Pakhtunkhwa, as well as South Waziristan and Bajaur.

The projects have been implemented, accomplished and finalised according to the predetermined schedule and handed over to local education authorities.The Director of the Emirati project to assist Pakistan, Abdullah Khalifa Al Ghafli, stressed: “The wise leadership of the UAE places utmost importance on humanitarian causes, notably education and poverty, creating a better future for countries and people. The UAE’s political leadership has always provided support for the education sector in Pakistan on all academic levels, elementary to university and this support includes all individuals seeking education of both genders.”

Al Ghafli said there were two kinds of projects, one dealing with elementary education had 43 projects that included the construction, refurbishing and maintenance of elementary and secondary schools. The second included 10 projects for the construction of middle schools and a number of higher and technical education establishments. – Khaleejnews