No Result
View All Result
Home Education Colleges and Universities

by ToP
in Colleges and Universities, Education
0 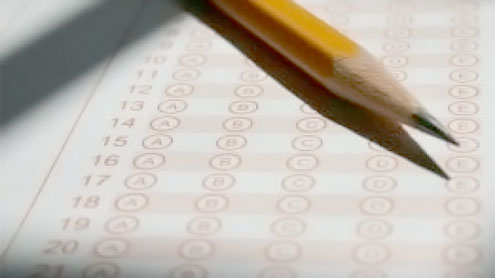 LAHORE: The superintendent of an examination centre was caught red-handed while sending the question paper and answer-sheet to the house of a BSc student on Friday.

The superintendent was blacklisted, whereas an unfair means case (UMC) has been filed against the student.According to details, private candidate Shanzay Sadiq, a resident of DHA, who had been taking exams at the Centre-54 of the Punjab University’s Examination Centre on Wahdat Road, was cheating with the connivance of Alia Anwar, the superintendent of Centre-56 and assistant professor of the Government College, Wapda Town.The candidate was reportedly given answer books a day before the examination, while she used to get the question paper on the day of the paper from the superintendent in the morning outside the bank.

The candidate used to solve the paper on the already-given answer book at her home, and submit it at 12pm at the examination centre, while the superintendent used to mark her attendance.After finding discrepancy in the attendance sheet of English Paper-A of Examination Centre-56, Controller Examinations Prof Dr Liaqat Ali formed a committee to investigate the issue.The committee strictly monitored the activities of the candidate and the superintendent for eight days to dig out the facts.On Friday morning, the team found the superintendent getting a packet of sealed question papers from the bank and boarding a car with a male driver and the candidate inside.

The superintendent was later dropped at the examination centre, while the candidate was seen reading the question paper as the car turned. The driver and the candidate then reached R Block of the Punjab Cooperative Society, near Johar Town, and entered a house.On the other hand, the suspected examination staff of the centre was also being watched by a special team. A team, posing as routine checkers, entered the examination centre and found two lines blank in the attendance sheet.

The team waited for the closing time and packing of answer books. At that time, the team checked the bundle of answer books and found that 12 candidates were marked present but there were 13 answer books in the sealed bundle, which included the answer book of Shanzay Sadiq, which had reached the centre at 12pm.The accused superintendent confessed to her crime, and submitted in writing that she was managing the entire activity.

The controller examinations said that it was a success of the Punjab University’s examination system and the very complicated case was thoroughly investigated for eight days to unearth the truth. He said that the superintendent had been blacklisted, while a UMC was registered against the candidate. He said that a letter would also be written to the Education Department to take departmental action against the assistant professor. – Dailytimes