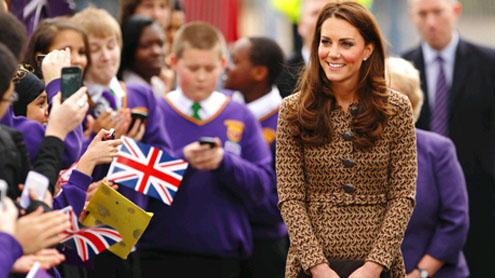 Kate Middleton couldn’t resist an invitation to help children with their paintings on a visit to a primary school – and ended up with a smudge of red paint on her dress as a result.

The Duchess, who studied history of art as an undergraduate, was asked to help paint the ear of a cat by Fabiha Ahmed, a pupil at Rose Hill Primary School in Oxford.But she was concentrating so hard on her brush strokes that the Duchess didn’t at first notice that she had got red paint on her cuff.The 30-year-old Duchess, addressed as Miss Catherine by the pupils, was on her first public visit to the headquarters of The Art Room, one of four charities of which she is Patron, which uses art therapy to build the confidence of vulnerable and disadvantaged children. For the second time in a week, the Duchess proved she has an eye for a bargain, as she wore a wool shirt dress by the High Street brand Orla Kiely, which was reduced from £325 to £162.50 in the sales.

Like the cut-price Hobbs coat the Duchess wore on a visit to Liverpool last week, the brown bird print jacquard dress sold out within minutes of pictures appearing on the Internet of the Duchess wearing it.It may now be on its way to the drycleaners, however, after the Duchess’s mishap in the school’s own Art Room, where she encouraged children who were painting characters from Edward Lear’s poem The Owl and the Pussycat.

The Duchess put on an apron embroidered with “Miss Catherine” in keeping with the Art Room’s other staff, who are all known by their first names, and sat between Jaydn Proffitt, seven, and Luis Lee, eight.As they painted the owl from the poem, she asked Jaydn whether he was going to put a buckle on a belt worn by the owl, adding “there’s the bling!” as the schoolboy picked up a pot of glitter to add a shiny belt buckle.

When another pupil, seven-year-old Mariam Olayinka, spilled water all over the table, the Duchess leapt to the rescue, lifting a painting up to avoid it getting damaged. Although Art Room teachers do not usually do any painting the Duchess did help one little girl, Fabiha Ahmed, paint an earlobe on her cat after a special request.Lisa Hancock, the Art Room manager at the school, said the Duchess would make a good teacher.She said: “Miss Catherine, as we called her in the lesson, was delightful. She seemed to have as much fun as the children and seemed very relaxed and in her element.

“She had all the right language and was very calm and gentle.”The Duchess chose The Art Room as one of the first four charities to which she has given her patronage, as she is a firm believer in the power of art to help build self-esteem.The charity helps to fund art teachers who give children intensive sessions in a specially-designated part of each school, where they create objects they can take home and keep.

It currently has a turnover of just £350,000 and employs nine full and part-time art teachers in four schools in Oxford and one school in London. Its other patrons include Mark Thompson, the BBC director-general, who was among those introduced to the Duchess at the school.Juli Beattie, the founder and director of The Art Room, said the charity had been “absolutely overwhelmed” by the Duchess’s decision to support what she described as “one of the smallest charities in the country”.

She said: “Even before we wrote to the Duchess asking for her help, she had found out about the charity by researching art therapy.“She asked a lot of questions about how we work and the type of children we work with.”Later, the Duchess visited Oxford Spires Academy, a secondary school which also has its own Art Room.After a buffet lunch of sandwiches, crisps and cakes with the charity’s staff, the Duchess listened as four of the children currently using the Art Room showed her their work and explained why they enjoyed sessions run by the charity.

Year seven pupil Milly Jinks showed the Duchess a self-portrait and said: “I like sitting on the sofa and listening to a story at the start of the morning and having breakfast here. It feels like home.”The Duchess also heard from two former pupils of the school who told her how the Art Room had helped them turn around their lives.Kelly Appleby, 23, said she had been badly-behaved and disruptive at school but had been given self-confidence by the Art Room because she found she was “good at something”. She now hopes to set up her own painting and decorating business. – Thetelegraph