‘And then there were none’: Edwardians keep the tradition alive with a riveting performance

by ToP
in Education
2 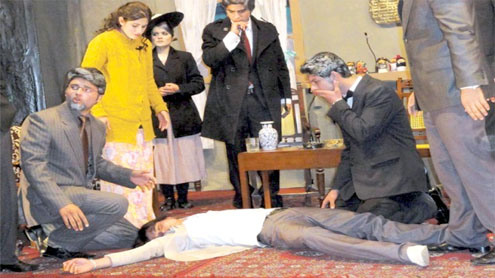 PESHAWAR: Students of the historical Edwardes College kept their century-old tradition alive with a riveting performance of Agatha Christie’s murder mystery “And then there were none” on Saturday evening.

The play, written in 1939, circles around ten people who were previously complicit in the deaths of others but escaped unpunished. They are tricked into coming onto an island.Although they are the only people on the island, each one is murdered one by one.Friends and families filled the hall as the performers, backed by a technical staff of 12 students, expertly played out the events.“This is not the first time I have watched a live performance. But watching students of [Peshawar] performing live on stage shocked me. I really liked it,” Shumaila, an attendee, said.

Kalimullah Khan, acting principal of the college, said it was not just a stage performance but a message to the world that things have changed in Peshawar.“The stage performance is the expression of Khyber-Pakhtunwa youth,” he said.Participants of the play were amused with performance of students as it was a first experience for some of the students to appear before such a gathering.Pactana, who appeared as Vera in the play, said it was a brilliant experience performing on stage for the first time.

“Without [the support of] my teammates and my parents, I wouldn’t have performed the way I did,” Pactana said.Nasir Iqbal, the director, said they rehearsed for two months for the play. He added that the play, with its murder mystery, was very different from the school’s previous plays.“Where there is some thrill, there is a mystery for people and we tried to provide the audience a drama full of suspense,” Nasir said.About 2,000 students study in the undergraduate and graduate institution, established in 1900. – Thetribune