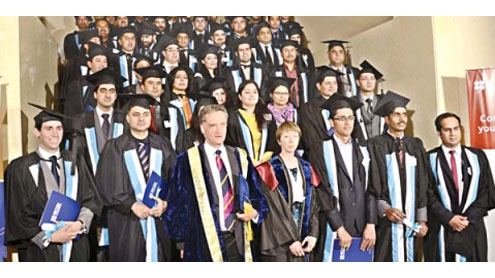 ISLAMABAD: The British Council on Sunday arranged a ceremony in the capital to honour the Pakistani students who have completed their studies in the UK but could not attend graduation ceremonies there.

The council hosted more than 200 such students and encouraged bright Pakistani students to study in Britain. Pakistan and the UK enjoy strong social, economic and cultural ties and the latter remains a favourite choice of many Pakistanis to pursue studies. However, many students who return from the UK express disappointment at having missed out their graduation ceremonies.

Sunday’s gathering in Islamabad was the first of a series of three events to provide an opportunity for the alumni from UK universities to relive their graduation moments and celebrate their academic achievements with their loved ones.The alumni received certificates of achievement from the British Deputy High Commissioner Alison Blake.

He said thousands of Pakistani graduates from UK universities embody the strong and lasting connections between the two countries. “These are remarkable individuals who are working towards building a brighter, better future for Pakistan and we are proud of their achievements,” Blake said while addressing the students. “Since a very large number of Pakistanis go to the UK each year for education, there is a big alumni presence in the country which the British Council is keen to work with.”

British Council Country Director David Martin said the British Council has established the British Alumni Association of Pakistan (BAAP) to organise former students. “The organisation has four provincial chapters and many other smaller sub-chapters across the country. I encourage all graduates of UK universities to join their local chapters,” Martin said. – Dailytimes