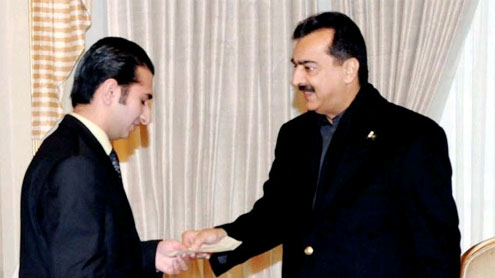 ISLAMABAD: Prime Minister Yousaf Raza Gilani on Thursday gave away a cheque of Rs one million as a token of appreciation to Zohaib Asad, who made a world record by scoring 28 As in O Level examinations.

Gilani, who invited the student at the Prime Minister’s House, lauded him for making Pakistan’s youth proud and inspiring them to excel in life through sheer hardwork. Zohaib Asad is currently studying Economics and International Development at Mc Gill University, Canada. Zohaib expressed his determination to return after completing higher education to serve the country that had given him so much. The prime minister appreciated his sense of devotion to the country and added that such youth were the hope of a bright future. The family members of Zohaib Asad were also present. – Dailytimes

Govt ready to talk to PML-N over early elections: Zardari

Govt ready to talk to PML-N over early elections: Zardari