by ToP
in Education
1 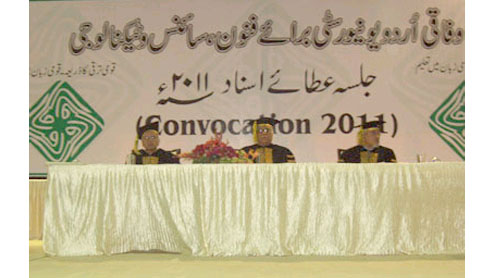 Karachi: Federal Urdu University of Science, Arts and Technology (FUUAST) held its third convocation on Thursday at Expo Centre, in which about 600 students were conferred degrees and 113 students who showed outstanding performance were awarded with gold medals.

The top three positions went respectively to Musarrat Al-Ain of MSc in zoology, Aatira Muhammad Ali of mathematics and Humaira Mehmood of botany. Top scorers were awarded with the ‘Begum Anees Dehlvi Gold Medal Award’. Besides this 17 PhD and one MPhil degrees were also awarded.

Chief guest of the convocation was Pakistan Science Foundation (PSF) chairman Dr Manzoor Hussain Soomro. Addressing the convocation, he congratulated all the graduating students, faculty and administration of the university, for their continued service for the promotion and betterment of education level in the country. On this occasion, he announced that PSF would fund the scientific research projects from the FUUAST. “This will not only improve the scientific research being conducted in the university but also create an industry-academia relationship,” he added.

FUUAST Vice Chancellor Prof Dr Muhammd Qaiser chaired the convocation. He shed light on the importance of the higher education in the country and advised successful students to be honest in their professional life. He urged them to use their skills for the betterment of their future as well as of the country. Talking about the services of the university, he said that more than 13,000 students are enrolled in more than 40 departments and programmes of the university. There are more than 400 teachers, including more than 100 PhDs and more than 51 MPhil faculty members in the university, he added.