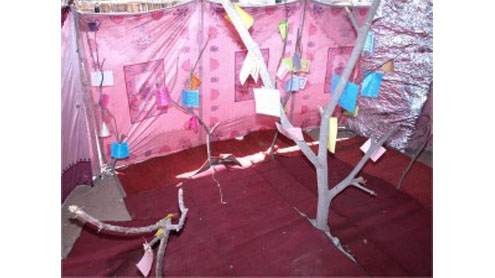 KARACHI: Gul Bahao Trust Head Ms Nargis Latif said that the concept of Safai/Kamai or Garbage N Gold Bank, although in its rudimentary form, is the backbone of Karachi’s economy.

Speaking to a packed audience of BBAs and MBA at Newport University Karachi, she describing the bank as a third world solution to first world problems. She said it had attracted the attention of the world famous TV channel CNN.She said that both BBC and CNN held detailed discussions with her about it and were keen to cover it. Nargis said that Karachi being the seventh largest city of the world can vie with any first world country of the world in terms of wealth and is an important factor behind Gul Bahao’s success.

She revealed that Gul Bahao cashed into the free flow of money available during the Musharraf era and experimented with all kinds of material to produce goods and concepts of international significance. Using a team of 80 youths and a dozen trucks and pickup vans it went into the luxury of giving 24 carat gold to Kabarias and conducted a citywide campaign of “Kitchra Do Sona Lo” to Kabarias to start the Safai/Kamai Bank. Nargis claimed that having spent millions of rupees on research (only in 2002 audited accounts revealed an expenditure of Rs10 million and Rs1 million for a single year), her organisation has a blue print for any political party for revamping the entire economy of the country including cheap fuel for running power plants!

Going into the background of modern day innovations, she said that they were in fact up-gradations of traditional practices e.g. the traditional midwife has developed into an obstetrician, the grocery and provision shop has evolved into the supermarket.Tomorrows GNG (Garbage NGold Banks) is in fact 21st century version of our Kabaria or junk dealer. Kabarias are minting money, she said, despite the fact that they are totally illiterate.

To the audience who were listening with rapt attention, the Gul Bahao CEO threw the question “Don’t you think education makes a difference?” Nargis said that in order for the Kabaria to develop into a sophisticated Safai/Kamai bank its outward appearance must change. All the paraphernalia of the modern banking system like computers, air-conditioned hall etc. must be there.

Most importantly, she said it must be located on main arteries of the city. Does any successful bank operate in any by lane, as in the case of Kabarias which come under the nomenclature of the informal economy, she questioned. Nargis said she was trying to get the academia interested in this kind of bank; where the instruments of banking is recyclable industrial waste; which works on zero rates interest; whose profits are as much as that of any traditional bank; where always the current rate of different waste materials displayed on the notice board in the manner of money exchangers.

She said that LUMS was one University which had sought written permission from Gul Bahao for introducing the concept of the Garbage NGold Bank in its Syllabus. It also awarded a research worker for her dissertation on this very subject i.e. the Safai/Kamai Bank. She revealed that some textbooks of secondary level have already included this and other work of Gul Bahao in their textbooks.

Indian media all praise for Kayani

Indian media all praise for Kayani