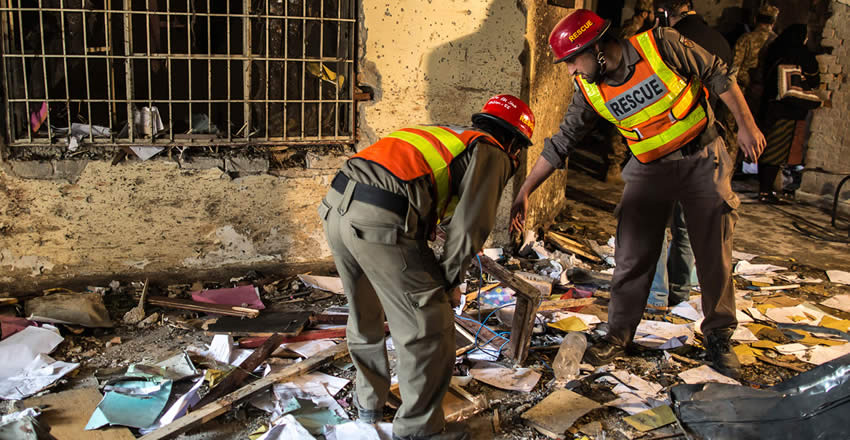 Death’s a pageant. For those who parade it, be it Beslan or Peshawar, what better place than an school auditorium to make an appearance. The audience is students, here to learn about first aid from a military instructor.

They will also be victims, when death’s work is done. Could it have helped, could this lesson have prepared the children for a murderous intent of diabolical proportions? You look at the table with a first aid box, the bandages, balms and syringes and realise how woefully insufficient the supplies are for the slaughter that visited this place.

Only one oxygen mask! And all those children dying, life draining out of them in blotches of red. Even if it had been possible, past the primacies of triage, who could have had oxygen, who could have received a CPR, when all are hit and all are dying? In the end, no one could because the pageant demanded a spectacular body count.

Blood like beads, beads like strings, poured out of kids who ran for dear life. Someone needs to scrub this place, replace the sweet copper of blood with the smell of breakfast before school, snacks shared in afternoon breaks. The scent of ink and chalk powder, mixed with that of sebum on warm skins when kids come in flushed from the sun. We move around hushed, robbed of language. Something inside us howls but only comes out in sniffles, in lost, dazed silences. When a phone chimes in a merry tone somewhere down the hall, it is an alien sound.

Heads jerk up from whatever they are studying, amazed that such a sound could exist. Looking for the student’s name on a paper caked with blood, you see none, only a sentence that mentions Von Neumann Stability Analysis. Chaos came here. There are bullets strewn all over the hall and out in the corridors. Between the rows of seats and down the stairs are shoes, bags and books that you look away from because they lie amidst glistening pools of arterial blood.

We were in the auditorium when suddenly the doors blew open and someone started firing. We ran out in panic, some of the kids fell and were trampled. There were more than 200 children in there from class 8, 9 and 10. I only saw a man in white clothes with a gun before I was hit in both legs and I fell. They left the hall. I was trapped in there, trying to free myself from all the bodies that fell over me. I didn’t even know I was hit. I thought I couldn’t free myself because of the weight piled up on top of me. And then they came back. They shot those who were still alive. “Don’t let anybody go,” one of them said. I stayed still, playing dead.

An electricity glitch makes a constant crackling sound in the hall, running across the roof like gunshots — of which most of the students died. Unnerved, you wonder if it is the ghosts caught in the circuits, reliving their anguish over and over again, trapped in a purgatory of our making. How do you release them from the trauma of young, sudden death? How do you ease them into an un-tormented hereafter? Full of life and vigour, death is not a conscious presence for children. It comes easy to us adults because we dwell on it and in the end, we are ready for it.

It’s surreal, the visit to the school, like a crawl through a nightmare. All this blood and debris, crushed glass and pockmarked walls. The lingering stench of burnt, mangled furniture and gunpowder. It reveals a horror that builds by degrees as one walks from a hall to a classroom where bags sit expectantly in chairs waiting for children to return, to a computer lab that witnessed unspeakable violence to corridors littered with bullets, diminishing one in the same proportion. A student, still dressed in uniform like he has turned up for another day at the school, breaks down in the corridor, pointing in horror at a woman’s shoe he recognises, that of his class teacher. In class 11-B is a student badge on a chair with the name Maher Ali that you desperately hope lived through the grisly ordeal that unfolded in the classroom. It makes you want to curl up and go back to the womb, unborn and unknowing.

The administration block is where they came after killing children in the main school building. Among its cracked, charred rooms is the principal’s office where a suicide bomber blew himself up. Children say she was burnt alive because she asked terrorists not to harm them. There are shattered trophies on a broken shelf, a framed certificate on the wall scarred by a hail of pits caused by the blast. It says Tahira Qazi was a true professional committed to ensuring quality in education. And there, amidst the ruin of it all, spilled out of a drawer of her desk is a pool of roasted chickpeas. You can almost imagine her busy, bent over paperwork, nibbling on an austere snack because she had no time for lunch.

Out by the periphery wall of the cantonment cemetery where they have built a little shrine to the dead children with pictures, candles and flowers, stands a woman in a burqa, repeating the words “oh my heart, oh my heart…” Her haunting lament — even when it makes you wonder if we have a heart left anymore — would raise the dead if it could. – dawn