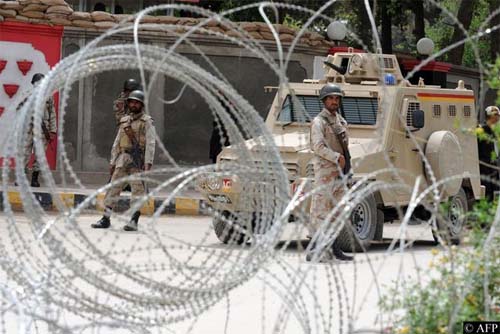 Art of War opens with a warning, “The Art of War is of vital importance to the State. It is a matter of life and death, a road either to safety or to ruin. Hence it is a subject of inquiry which can on no account be neglected”. At the strategic level, a leader must take the necessary steps to prevent a surprise military attack.

Regard¬ing offensive military operations, Art of War states that they are justified only in response to a direct threat to the nation. In 2010, first time the United States Air Force launched more unmanned than manned aircraft. This shows the IT application in the military sectors and the more investment on technology. It is possibly that the war fighting in the ground will be accompanied by invisible battle of bits. This may be state sponsored hackers over the IT infrastructure. Cyber warfare is unconventional and asymmetric warfare. The nations who are weak in conventional military power are likely to invest in it as a way to balance conventional disadvantages. Good hacker software is easier to obtain than a tank or a rifle. Some analysts argue convincingly that the threat from cyber warfare is overstat¬ed.

Modern militaries, the governments and economies are increasingly reliant on IT infrastruc¬ture and it must be protected. A major challenge with IT technology is that it changes so quickly it is difficult to follow let alone master all of the latest developments. National security planners cannot afford to underestimate its potential. In the near term, international security dialogue must update familiar with attack, defense, deterrence and escalation, to encompass post-IT Revolu¬tion realities.  Cyberspace is such a new arena of conflict that basic defense and attack strategies are still unclear. This is because of some reasons; first there have been no major wars between modern, cyber capa¬ble adversaries. Second, cyber warfare tactics are highly technical by nature it can only understand by computer professionals. Third, Hacker used same tactics as traditional terrorist found success in pure media hype but it is very difficult to trace out the hackers.

Fourth, Cyber attack is challenging to retaliate against an asymmetric threat. Finally, the sensitive nature of cyber warfare capabili¬ties and methods used to conducted cyber attack.  From Pakistan’s point of view, it is currently a new field and straightforwardly talking Pakistan is not ready to give strong reaction if any cyber attack happens. Seven years back, Pakistan used $3 million on creating a department for cyber crimes. “The reason for creating the National Response Center for cyber crime (NR3C) is to stop the abuse of Internet and follow those included in cyber identified crimes,” Iftikhar Ahmed, spokesman for Pakistan Interior Ministry, told the press at that time. NR3C handled case related to email hacking, financial crime, denial of service attacks, ATM fraud, Mobil communication, anti Islamic/Pakistan material, credit card fraud etc.

It is mainly consists of eight wings including forensic lab, media projection, technology development services, network operation and security, legal regularity and issues, seminar and training. In Pakistan, as contrasted with the satisfactory measures being taken for the upkeep of the conventional forces and the wellbeing and security of the strategic assets, it is alerting to see the nonappearance of any tough risk observation in the theater of cyber warfare. The government and the armed forces appear to have neglected this risk for too long now and are not ready to promptly react to this unique challenge of cyber attack. Pakistan would not be able to bear any more complacency in this regard and preferred take instantaneous steps to react to this sneaking risk on exacting war. The CIA contractor Edward Snowden has disclosures the U.S secret that how it is used to monitoring the different countries. According to reports Pakistan is the second largest target of U.S.

In this regard the Chairman Senate Standing Committee for Defence, Senator Mushahid Hussain Syed called on important meeting. In this meeting it was decided to work together for the Cyber Security of Defence, economy and citizens and that it is need to induct required skill sets and experience and professional people in various security organizations. Senator Mushahid Hussain Syed also admitted that Pakistan doesn’t have any Computer Emergency Response Team (CERT), so having required experience PISA may help Senate Defence Committee to establish Pakistan National CERT. To conclude, Weapons like E-shells have developed as another danger to challenge the military communication network system by transforming enormous electromagnetic pulse. In this domain state must have the ability to collect, share, access and protect information and to make better in the process of correlation and fusion Pakistan has to collaborate in cyber domain through technological enhancement.

Pakistan needs to focus on pro-active command of cyber and information with Strong mechanism of cyber warfare in Pakistan could establish through coordination, collaboration and mutual working among various civil and military institutions. Nevertheless, there are various dimensions of cyber warfare like the propaganda war, satellite war and psychological war, internet war and war by nerves. Recently India-Israel had mutual working in the domain of cyber warfare and prism scandal of United States also create alarm for the security of Pakistan. So for Pakistan this is time to use these tools as bullets or weapons to make sure state’s safety and security by all means. Pakistan should adopt various options to counter this threat. Some of these are first; strong co ordination should be established among various organizations. Secondly, it is need to create awareness about the danger of this threat.

Thirdly, professional and skilled person should be inducted in security organization. Fourthly, NR3C should be made more effective and work in proper direction. Fifthly, an emergency of computer response team should be established as many countries have already done. Sixthly, it is need to make perfect coordination between military and civilian organization to counter this threat. Seventhly, Cyber attacks can be launched during peace time at non military targets or at military targets by non military groups, these actions can undermine the Pakistan’s nuclear command and control, hence risking the defense and security and strategic stability in region. Eighthly, Pakistan should not underestimate its effect and uses in warfare and also in order to achieve state’s economical and political objectives.