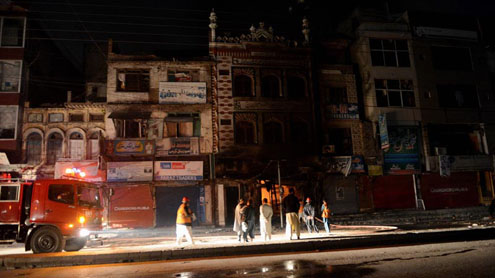 While the country by and large saw off Ashura peacefully, the sectarian violence in Rawalpindi has caused not only 10 deaths, injuries to 68 and the gutting of some 100 cloth shops, it has also evoked an outbreak of sectarian clashes in Multan and Chishtian.

The spread of sectarian violence beyond Rawalpindi, despite the authorities’ strong response and deployment of the army to scotch the trouble, leaves no room for complacency. If not nipped in the bud, the rising sectarian sentiment could enfold larger parts of the country, bringing freash headaches for the authorities. There can therefore be no dithering in taking the necessary timely actions to put the lid on the rising tensions between different sects. The Rawalpindi incident has reaffirmed the long standing plea of the secular-liberal forces of the country that hate speeches delivered from the pulpit need to be stopped.

We have become so complacent about such flaws in our society that when Maulvi Shakir was spewing hatred against Shias in the Friday sermon from Maulvi Ghulamullah Wali Masjid, none of the police manning the mourning procession were spurred into action. Nor did the police use the power vested in it by law under the City District Government Rawalpindi that forbids mosques to use loudspeakers on Fridays other than for prayer calls. The police’s indifference on such a sensitive occasion, especially when the main Ashura procession route had been declared highly fraught under the Muharram security plan, resulted in the clash that destroyed lives and property. The city administration also failed at ensuring the presence of peace committees comprising scholars from different schools of thought to accompany the Ashura procession and ensure peace.

Such failures show the shallowness of our understanding of the sectarian malice that by now has dug deep roots in our society. The police even remained oblivious of the presence of some prominent leaders of the banned Sipah-e-Sahaba Pakistan inside the mosque in question and its adjacent Taleemul Quran madrassa. The intelligence report submitted to the Chief Minister Punjab Shahbaz Sharif has blamed the local administration and its law enforcement agencies. Eventually heavy deployment of the army, a curfew and Section 144 was imposed on Friday night to bring the situation under control.

The curfew will remain imposed for another 24 hours although brief relaxations have been allowed to facilitate the citizens of the city. The encouraging thing that has come out of this conflagration is the rallying of the ulema behind the government and their demand to make an example of the miscreants involved in the incident so that such incidents are prevented from recurring. On the request of the Punjab government, the Chief Justice of the Lahore High Court has constituted a judicial commission headed by Justice Mamoon Rashid Sheikh. In a few days, all other things being equal, things may revert to normal.

The bitterness, however, among religious activists of different denominations may not subside and could reappear at another place and time. Unless a sustainable and consistent solution to the problem is found through a combination of regulations, dialogue and deterrent punishments, the monster of sectarian violence will be hard to tame. The fusion of sectarian violence and terrorism could mean many more years to prevail over the menace, something the country cannot afford. The state and the people must unite to nip the evil in the bud. There is no time to lose if we draw the correct conclusions from the Rawalpindi incident. -Dailytimes