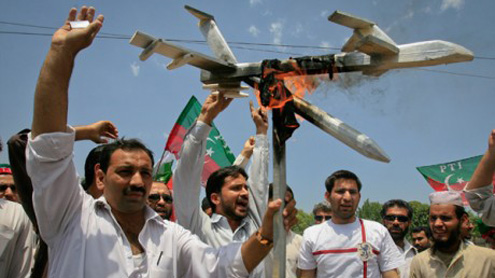 Tensions aggravating within a period of two years, relations between the US and Pakistan have taken a 180 degree turn. While Islamabad may have serious differences with Washington, both countries need to ensure that these remain within manageable limits.

As if the increase hype in the drone attacks after the Chicago summit was not enough (three persons were killed in the latest strike in North Waziristan), the US has now deployed USS Enterprise into Pakistani waters near Gwadar. As it comes after serious warnings from Leon Panetta, the move is likely to be interpreted as an attempt at arm-twisting by the US. The US has to realise that any aggressive action on its part will have far reaching effects. Among other things, it will strengthen the militants. The Raymond Davis affair, military operation to get rid of OBL in Abbottabad and the killing of 26 Pakistani soldiers by the Nato forces in November have all caused enough bad blood between the two countries.

The refusal by Pakistan to open the Nato supply routes is the obvious reason behind the upping of the ante by the US. This was unnecessary as the Pakistani side now sticks only to one demand, an apology from the US over the Salala killings in return for opening the Nato supply routes. Statesmanship requires that Washington accept the demand to end the stalemate.  Those in Pakistan behind making decisions about ties with the US have to realise the dangers that accrue from confrontation between the two countries. The US has signed an agreement with India for holding trilateral talks with Afghanistan to help Kabul.

Washington now wants India to fill the post-withdrawal vacuum in Afghanistan. It also wants India to play a bigger role in training Afghan security forces. At their strategic dialogue, the US and India did refer to Pakistan’s role in Afghanistan but only to underscore its support for terrorists. All this measures may cause resentment in Pakistan but will hardly bring peace to Afghanistan. What is needed is to jointly fight militancy which will remain a threat to the international community and Pakistan after the Nato troops have moved out. The US and Pakistan need to reach a compromise to benefit them and the region.-Pakistantoday