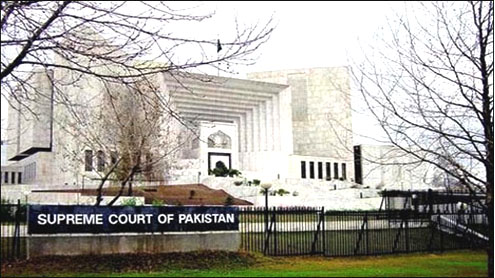 An atmosphere of acute tension and, indeed, expectation pervaded that the Supreme Court would, on Tuesday, finally spell out the action it wants to be taken against those responsible for not only the non-implementation of its verdict on the National Reconstruction Ordinance, but also its studied defiance of it.

The court’s pronouncement, rather measured, given it’s history with it’s judgements being given short shrift, has given the government several options to choose from. These may be employed as mere delaying tactics. Or may be seen, in the matter of the formation of a larger bench under the Chief Justice, as passing the buck. The apex court has, however, afforded a peep into its collective thoughts by pointing towards the course the law would take, if the authorities continued to persist in their present attitude of provocative disregard of the judgement. The Prime Minister has come up for a scathing criticism, being termed, “apparently, not an honest man who has not been loyal to the Constitution”.

The course of action against defaulting functionaries, or guidelines for the larger bench, includes a pointed reference to him as well as the President. Both have pledged an oath, with God as witness, to uphold the Constitution against self-interest; the court felt that they, instead, showed allegiance to the party and not the law itself. Thus, they could be declared ineligible for election to Parliament. As candidates for the presidency have to be, first of all, qualified to become an MP, the observation implicates the President as well. They both could, therefore, be disqualified from holding office, creating a political void in the country. The President and the entire cabinet would have to go.

At the outset of the decision, Justice Asif Saeed Khosa, who headed the bench of five judges to hear the case, recalled, with disappointment, that the Supreme Court’s clear verdict had been disobeyed and warned that its verdict could be “quite unpalatable”. There is no doubt left, though, that in the event the government remains defiant, the consequences for all involved would be quite serious. And, if Mr Babar Awan’s reference to “East Pakistan”, suggestive of the pangs of separation, is any guide, the repercussions for the country as a whole would also be too frightening to imagine.

The PPP must realise that democracy will only flourish if prompt and unquestioned adherence to the decisions of the judiciary is exercised. Under a democratic system, there is no room for deviation from it at all. The PPP’s coalition partners could help it see the logic of this fundamental principle. Otherwise, its posture would constitute an invitation to others in the country to violate the law, which means a state of chaos. Hopefully, the Attorney General would give good tidings to the nation when he appears before the larger bench on January 16. – Nation