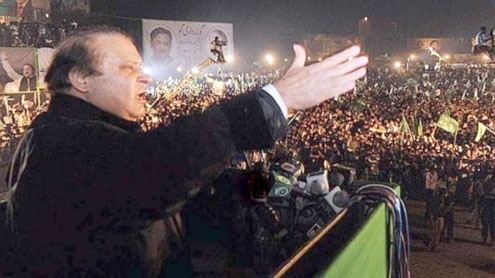 PML-N chief Mian Nawaz Sharif launched the election campaign of his party at the rally in Faisalabad on Sunday.

The rally was widely seen as a response by the PML-N to the Tehreek’s rally in Minar-i-Pakistan. Mian Nawaz’s declaration that his party would go to the courts if the government failed to institute an enquiry into the memorandum sent to US Joint Chiefs of Staff Committee Chairman Adm Mike Mullen showed that the PML(N) took the PPP as a major electoral opponent. Mian Nawaz, it should be remembered, has got to tackle a changed situation, for while he had begun a campaign for the removal of the PPP government, he has had to meanwhile tackle the newly emerging PTI challenge. For that, the Faisalabad rally was the first big test. The Faisalabad rally was enough of a success for PML(N) supporters to claim that his votebanks in his strongholds are intact.

This was the first time that Mian Nawaz used his campaign rhetoric against Imran Khan, and his promise of loans to unemployed youth if voted into power was meant clearly to build support in his already supportive constituency. Another dimension of Mian Nawaz’s campaign against the PTI is his claim to have done in office already what Mr Khan claims he will do if elected. He also defended his record, not just in office, but his personal record. He once again attacked the PPP over President Zardari’s alleged corruption, showing that the main emphasis of the campaign, which is the PPP, remains.

The greatest danger is faced by the opposition voter, which may find itself torn between the PTI and the PML(N) and thus denied the change which it will be voting for. The PPP must keep in mind that the PML(N) will be its main opponent, and Mian Nawaz’s barbs against the President were also a trenchant critique of its present tenure. It should also not make too much of its ability to put off elections, this is a futile debate and one that in present circumstances ought to be avoided.

However, the PTI should also learn from the Faisalabad rally that the urban areas are not secure for it, and the PML(N) will be fighting hard against it. The PML(N) itself should not become complacent after the Faisalabad rally, and should remember that it still has not achieved its targets. Nor has it removed the present government to hold fresh elections or ‘defeated’ the PTI. The Faisalabad rally was only one stop on the trail, not the culmination. Much can still happen before the next election is called. – Nation