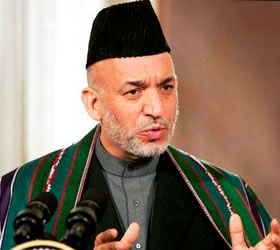 During his visit to Islamabad on Wednesday, President Karzai was accompanied by the Afghan ministers of defence and interior and the national security adviser. This was an indication that the talks were going to centre around the issue of Taliban and terrorism. At the joint press conference with President Zardari, the Afghan president maintained his usual ambivalence about Pakistan. He complained that there were sanctuaries and training camps in “our countries.”

He also asserted that militants were not coming from the Ivory Coast but from “our own lands.” This was an indirect way of castigating Pakistan for the alleged presence of sanctuaries and training camps of militants within its territorial limits. At the same time, Karzai pledged to work together with Pakistan to eliminate the terrorist hideouts.

When his attention was drawn towards reports that the Indian consulates in Afghanistan were being used for creating unrest in Balochistan, Karzai said his government would never allow anyone to use its territory against any other country. He demanded proofs when he was told to extradite Braham Bugti. To many, this amounted to dodging the issue.

There is a perception that while Pakistan has tried its level best to assist Afghanistan in its fight against the terrorists, a lobby in Kabul comprising India-friendly Northern Alliance elements has tried their level best to sabotage the friendly relations between the two countries. Pakistan has reasons to be concerned about attempts by New Delhi to increase its influence in Afghanistan. Pakistan faces a hostile India on its eastern borders.

It cannot afford to put itself in a situation where it is in a nutcracker. Pakistan has, therefore, made sacrifices over the last many decades to develop close ties with Kabul. Pakistan has provided facilities to the landlocked Afghanistan to conduct transit trade through its territory, much of which reaches Pakistan’s market through circuitous route without payment of taxes. Islamabad acted as a host to over two million Afghan refugees for more than a decade, putting its own internal security at risk and sharing its limited civic amenities with a very large chunk of refugees.

Some of the Afghan refugees are still staying in Pakistani camps. Pakistan has gone out of its way to help Afghanistan hold successive elections in peace by stationing 80,000 soldiers in the bordering tribal areas to seal the Durand Line. Despite all these actions, the Karzai government continues to indulge in hostile activities, including allowing India to open consulates in the Afghan provinces bordering Pakistan where the local population has little need of them. Islamabad’s complaints regarding the leaders of the Baloch terrorist factions being provided sanctuaries in Afghanistan have meanwhile gone unheeded.

Last month, the erstwhile Afghan foreign minister, and presently national security advisor, Rangin Dadfar Spanta urged the United States, in an interview given to Washington Post, to impose sanctions on Pakistan and refuse visas to Pakistani generals. He had claimed that the central issue in the war against terrorists was their ability to take refuge in Pakistan and not the rampant corruption in Afghanistan.

He demanded that “Pakistani generals and others that we know definitely are involved in supporting terrorist activities” be denied US visas. Spanta said the United States needed to redirect its drone war to target Afghan Taliban commanders living in Pakistan. Earlier, Spanta had suggested that Washington’s support for Pakistan was a strategic mistake and had called on the US to reconsider its relationship with Islamabad. He was rebuffed by the State Department which maintained that Pakistan was a strategic country of direct importance to the US.

Unless Karzai reins in these elements and responds to Pakistan’s friendly initiatives in the same way, there is little hope for the resolution of doubts and suspicions presently prevailing between the two neighbouring countries. At the Wednesday joint press conference with Karzai, President Zardari reiterated that strengthening and expanding co-operation between Pakistan and Afghanistan and among neighbouring countries was a key to regional stability, security and economic development.

He also said that during his meeting with Karzai, bilateral relations had reached “new levels.” There is however, a need for realism on the part of Kabul to develop a durable and mutually beneficial co-operation. Goodwill cannot, for long, remain one-sided. To maintain friendly and beneficial bilateral relations, there has to be reciprocity from the Afghan side also. What president Karzai needs to realise is that it takes two to tango.