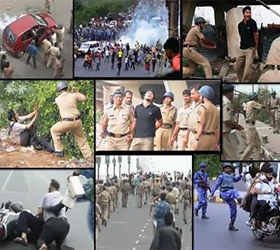 Indian brutality in Occupied Kashmir once again came to the fore when its security forces shot and killed sixteen innocent Kashmiris who were in the streets protesting the Quran burning plan of an American priest and the actual desecration by some Christian extremists outside the White House. These protestors were armed with nothing more than stones, but the targeting of the Kashmiri youth by the Indian security forces has been part of the state terrorism unleashed by India, since June this year, against yet another generation of Kashmiris seeking freedom from Indian Occupation. While the Indian leadership goes through the farce of expressing regret over these killings and declares the need to address the grievances of the Kashmiri people, the killings by Indian security forces cannot be taking place without the approval of the same leadership.
Unfortunately, the Pakistan government has shown a bizarre muteness on this latest bout of Indian killings in Occupied Kashmir. There is a new indigenous uprising with a new youthful leadership that has now taken up the Kashmiri cause for liberation from Indian Occupation and for their right of self determination as committed to them by Nehru and the UNSC. Even the women have now come onto the streets and it is evident that despite Indian efforts to subdue the Kashmiris for over six decades the Kashmiris continue to pass the torch of their freedom struggle from one generation to the next. Only after the killings on Monday did Pakistan officially condemn Indian barbarism and asked the international community to stop these killings. But Pakistan can and should do more. It can freeze any moves on dialogue, cut off all access to Indian goods coming into Pakistan from vegetables to cotton, as well as the visas regime to get its message across of its foremost commitment to the Kashmir cause. If our policy is to give all moral, political and diplomatic support to the Kashmir struggle then we should do so on all these fronts. We should also move the OIC, ineffective though it may be but it can exert some diplomatic pressure on India – Nation