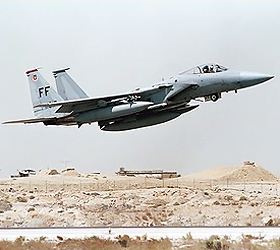 Saudi Arabia, like other nations, has a duty to defend itself against regional threats

The Kingdom’s plans to purchase $60 billion of US defense equipment are an important and necessary step in its defense. It can, of course, be expected that the Zionist lobby in Washington will seek to block the deal in Congress, claiming it threatens Israel. But legislators will probably be in little mood to listen, not least because this deal, which is one of the largest-ever arms orders, is likely to guarantee up to 75,000 jobs in recession-hit US factories.

Besides which, Israel simply cannot make a convincing case that by seeing to its own defenses, Saudi Arabia is in some way menacing the Israelis.

At its most fundamental, the Saudi government has a duty to defend the Kingdom and its oil reserves from regional threats, by upgrading its weaponry with the most up-to-date and effective equipment. That is precisely what the new F-15 fighters and advanced helicopters, which make up the bulk of this new armaments purchase, will enable the Saudi armed forces to do.

Given the continuing regional instability, it is a highly prudent and responsible reaction. Not least among the causes of concern to all regional states is the deplorable reality that, to the shame of its politicians and the fury of its electorate, Iraq still lacks a government.

It is Saudi Arabia’s good fortune that even with the substantial investments in the extraordinary new infrastructural development taking place throughout the Kingdom, the government is able to fund this huge order for US weapons over the coming five years.

Nor should it be overlooked that this new arms deal is a demonstration of the strong links that exist between Riyadh and Washington. Despite the strains, not least during the Bush years when the White House repeatedly refused to listen to the cautions and advice of its friends in the region, the Kingdom has maintained a consistent alliance with the United States. The core of the Middle East peace plan now being discussed in Sharm El-Sheikh is Saudi-inspired. It rests upon the original peace initiative crafted by Custodian of the Two Holy Mosques King Abdullah in 2002 when he was crown prince. This is testament to the quiet influence that Saudi Arabia has been able to exert in Washington, largely because of the immense patience that has been needed to persuade successive administrations to take a less blinkered view of the Middle East.

So barring a Zionist-inspired upset in Congress, this important deal is going to go through. The reality is that the upgraded weaponry the Kingdom has ordered will give it awesome firepower in defense of its interests – Arabnews