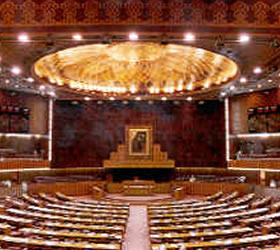 What is happening at the National Accountability Bureau has strong elements of classic farce about it, but it seems unlikely that there is going to be a happy ending. The Supreme Court had taken a sword to the upper echelons of NAB and declared its prosecutor general to be unlawfully posted to his job and directed that he leave post-haste. The prime minister, ever one to uphold the law of the land, agreed and said that Irfan Qadir should clear his desk forthwith and that he, the prime minister, would see to it that a new prosecutor general would be appointed soon after Eid.

The ex-PG, having none of this, turned up for work as per usual. He declared that he was not leaving unless it was at the signed direction from the president who appointed him in the first place, and that he would be derelict in his duty if he did otherwise. The prime minister riposted, saying that ‘all facilities’ were to be withdrawn from Irfan Qadir. All facilities? Use of the wastepaper-basket perhaps? The office bathroom? This is not made clear in the PM’s statement. Yet another spanner was tossed into the works by presidential spokesman Farhatullah Babar who said that there was no need for the president to make any further written order as the Supreme Court had delivered its judgment which the PM had accepted.

The latest statement from the PM’s office on the matter is to the effect that they are awaiting the summary of the case before making a further move – and on whose desk does the summary sit? Why none other than the Svengali of this production, the federal law minister himself. Thus we have arrived at a position where a man has been fired, he refuses to accept his dismissal, his powerful friends are moving to protect him because he is useful to them where he is and the prime minister is ignored by all and sundry.

This tricorn tussle has yet to get to the drop scene, and it is far from clear who is going to be the victor. Will the PM get the loan of a backbone and the resolve to impose his will? Can the law minister circumvent the PM and keep his placeman at his post? Will the Supreme Court lose patience and clap the lot of them in irons for making a fool of it? All will be revealed in the final act, but we now announce an interval for Eid. – Thenews